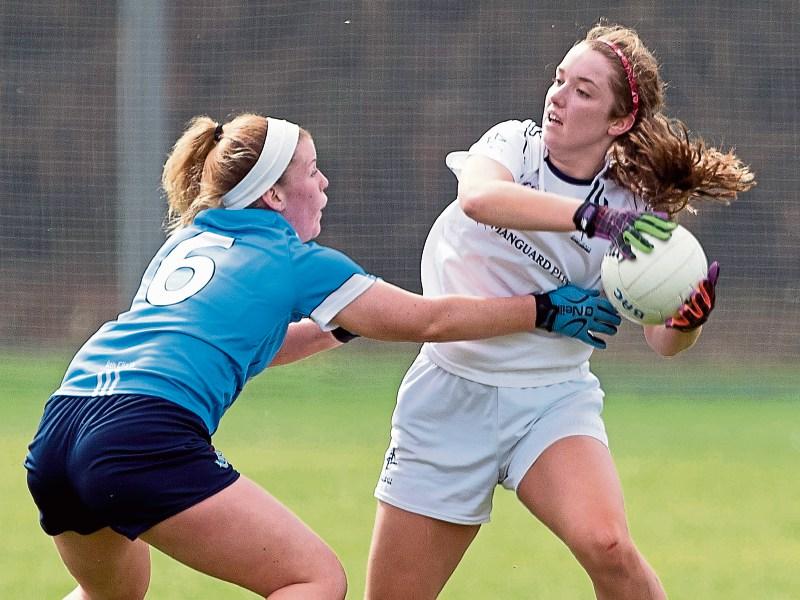 Kildare were outclassed as they went down to an excellent Dublin team in the Leinster Minor Football Final in Clane on Monday afternoon; Dublin winning on a final score line of 6-13 to 2-12, writes ROBERT CRIBBIN.

Dublin were much the better team throughout and five goals in the opening half portrayed the dominance they enjoyed.

Of them five, Niamh Sheehan was on the end of four of the goals as the Dubs time and time again found gaps in the Kildare defence.

It could have been all so different for Kildare though as before Dublin had even registered on the scoreboard, they created a great goal chance when Robin Forde was put through after great groundwork by Lara Cullen but her shot was excellently saved.

In fact Kildare competed well in the opening stages and only trailed 0-3 to 0-2 after ten minutes with Cullen and Kayleigh Humphries scoring.

After Dublin got their opening goal in the 12th minute through Niamh Sheehan the dam burst however.

Sheehan followed up with two more while Caoimhe O’Connor got a great individual score.

Sheehan got her fourth goal nearing half time but Kildare kept battling and a trio of points from Aine Nash and an opportunistic goal from Claire Melia gave Kildare some hope as they trailed by 5-8 to 1-6 at the interval.

The second half was a much slower tempo as Dublin knew that the job was done as O’Connor and Eimear Loughlin scored early points to put it beyond any shadow of a doubt.

Kildare though kept fighting and Lauren Kelly in particular never gave up and she kicked three fine scores before converting a penalty after a foul was committed in the square.

That spurred Dublin on again though and they woke from their slumper pretty sharpish as they went straight down the other end to score a goal when Aoibhe Bell fisted to the net after an original Sheehan effort was fumbled by the goalkeeper.

Kildare did finish strong with Lauren Kelly and Carrie Pedley scoring late points but the game was well gone at this stage.

Dublin could even have the luxury of missing an injury time penalty as Emily McGrory saved well but when all was said and done, Dublin were on a different level and ran out easy winners.