A Mammys' Day to remember and, eh, a spot in Division 1 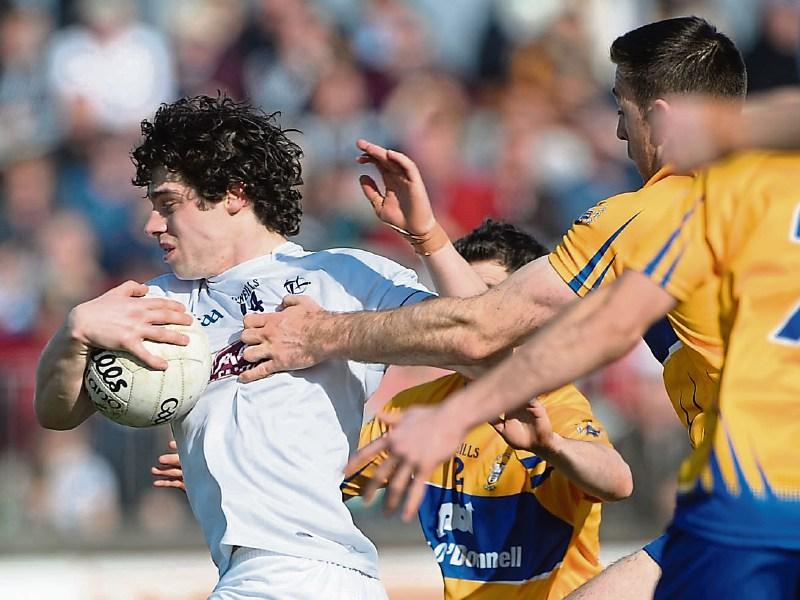 Chris Healy on the burst against Clare

Forget about that Lazarus lad, Kildare's promotion in the Allianz Football League  from Division 3 all the way to Division 1, in just two seasons, puts that Lazarus fella's exploits into the shade.

And make no mistake about it what has been achieved by Cian O'Neill, his management team, his players and all the backroom people, is one hell of an achievement.

From one step beyond the league basement to rubbing shoulders, come 2018, with The Dublins, the Kerrys, the Mayos, the Tyrones of this world can only be described as major.

It is indeed a massive boost to all involved with Kildare GAA in the county and certainly gives everyone an almighty lift.

At the start of the  season major changes were made both in the backroom team and even more so in the make-up of the playing  squad.

Upwards of a dozen lads departed the scene, some after giving tremendous service, for many seasons, but decided it was time to move on; that, plus the obvious firm decision to go the 'youth' route has to date paid rich dividends.

Apart from the results that have been achieved since the commencement of the League, it is the style of play that has really brought a freshness, a vitality and enhanced the enjoyment of the games enormously and while acknowledging the fact that results rule the roost these days, it is heart warming to see the style that The Lilies have gone with this term.

In these days of mass defences such as we have come up against both in Newry against Down; to a lesser extent against Derry in Celtic Park and again on Sunday last against Clare at St Conleth's Park, there must be a major temptation to go down that route.

Thankfully the team management have kept faith in the style of play they want the team to play and have remained steadfast to playing opening, attacking football.

That, of course, does not mean that it is attack at  all costs, nothing of the sort, it is all about a balance and anyone that has seen Kildare playing this season can see that.

Needless to say, and it was certainly shown on Sunday last against Clare, this Kildare side is still a long way from the finished article.

For a while in the second half against Clare they fell into their old ways, almost reverting to type as it were, something that happens to the best of teams once the pressure comes on.

However, unlike former times, they reverted to what they now do best; tighten up at the back, refusing to kick the ball for the sake of getting rid of it; showing patience in abundance,  despite the shouts that still can be heard from some very impatient supporters to “kick it in” the temptation to do so is resisted and the ball is recycled until the appropriate time.

Having gone through the first few games practically  injury free, the inevitable has happened with players picking up hamstring problems and the like while two have been hit with appendicitis, both thankfully on the road to recovery.

Those set-backs though have shown there is a reasonable depth in the  squad as players that have come in have shown they are more than capable of performing.

Needless to say there is much room for improvement but as Paul Cribbin stated after Sunday's win over Clare, “we probably would not have won this game last year” adding  “this team is young but is  learning with every outing.”

So a great day all round for Kildare and especially for Cian O'Neill and his management team who have shown tremendous belief  and in what they are trying to achieve.

Remember at the start of his league campaign retaining Division 2 status was very much the mantra, and hope,  of supporters and, without saying it, probably the team management and players.

We cannot state enough exactly what has been achieved by team captain, Eoin Doyle and his players and while Cian O'Neill stated there is a lot of football to be played before The Lilies run out in Division 1 come the season of 2018, for now there is the final league game this Sunday; the league final the following week in Croke Park and then the championship.

A Mammys' Day to remember without a doubt. And, eh, a spot in Division 1!