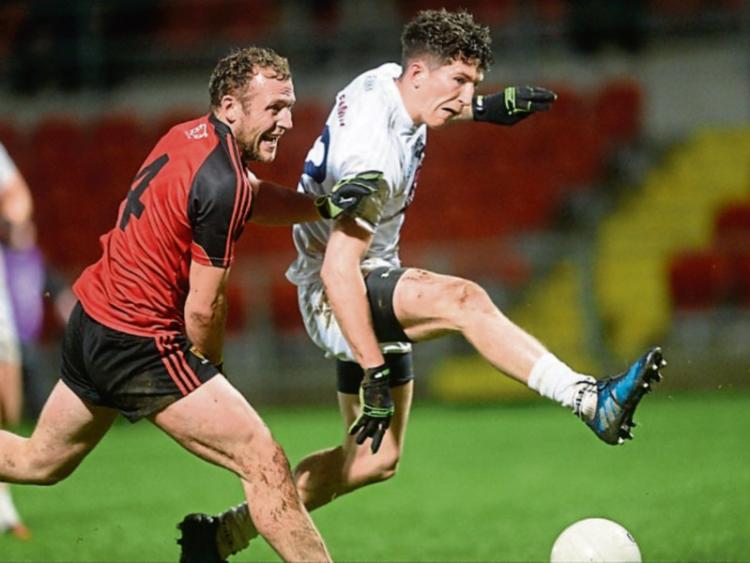 David Slattery gets inside Darren O'Hagan to score his second goal for Kildare v Down in the Allianz Football League Division 2 game in Newry. Photo: Adrian Melia

Kildare now have promotion in their sights

Two second half goals from half time substitute David Slattery saw Kildare cement their Division 2 status against Down in Pairc Esler, Newry, tonight (Saturday March 18). And with just two games remaining Cian O’Neill’s boys now have promotion to Division 1 in their sights.

On a miserable wet and windy night Kildare had to dig deep against a Down side that lined up throughout with, at times, 13 and 14 men behind the ball. It was not pretty at times but The Lilies kept their composure, their focus and their belief and in the end were thoroughly deserving of their five point win.

In a game that was certainly not for the purists Kildare led at the break 0-4 to 0-3 playing with the elements in their favour and no doubt Cian O’Neill and his management were not overly confident having to face into the wind on the resumption.

However they played some great football and with half time substitute, David Slattery netting twice, two goals that completely knocked the stuffing out of the home side.

Kevin Feely was absolutely outstanding, his fetching a joy to behold while in addition he kicked five frees with his right and left, and was deservedly given the man of the match award.