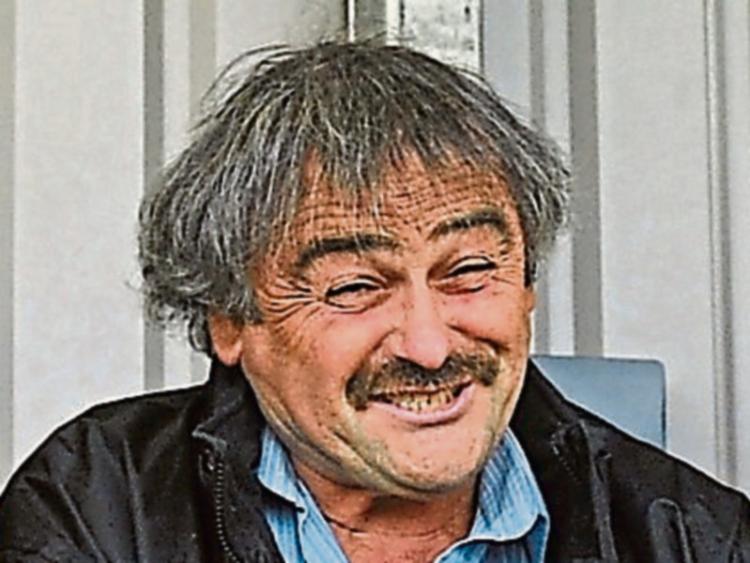 We knew we had crossed 'the line' when the kilometres turned to miles and your wan on Goggle Maps suggested we take a right turn 1,000 feet down the road.

And then, just in case we were still in any doubt, when we spotted  Arlene (Cash for Ash) Foster staring down at us from a lamp post painted red, white and blue, we knew we were definitely on the 'other side.'

Mary B's, popular  watering hole up the road from Celtic Park, was full of Lilies (live ones at that but maybe not all fresh) with Gus Fitzpatrick, PJ Whelan, Paul Dunne and Jacko in situ; the Kilcullen Aspells (Marie, Tony and Cormac) were relaxing having spent the night enjoying the Derry hospitality. Camillus Walsh arrived with a new 'friend' while Noel O'Gorman was, as usual, wearing his distinctive white headgear.

Joe Kelly of Athy fame arrived with family; Ray and Mary Hyland were spotted, along with Ray Jnr while Colm and Jackie Farrell were looking forward to the game.

Ballyteague, Sarsfields, Johnstownbridge, Milltown  were  represented, some having arrived on Saturday, others had driven up on a miserable wet morning.

Billy Dunne and Viv, were in flying form, Billy celebrating a very special birthday making a weekend of it, enjoying the Derry air on a three day mini break.

Tom Cross had a packed bus, as usual, his regulars full as pinkeens having enjoyed a breakfast in Banty’s gaff.

Overall though it was as small an attendance as we have seen for many a day, with The Lilies at least as well represented as the home crowd, many of whom must have used the day of rest to do a spot of canvassing for the upcoming elections.

The game itself was as open a game as you could hope to see, that in spite of Derry getting as many bodies behind the ball as was humanly possible.

Playing with a very strong biting wind Kildare opened impressively firing over points from all angles and by half time nine different Kildare players had made it onto the score sheet.

Despite leading by five at the break there remained  a doubt, not having raised a flag for the last ten minutes and hitting four wides on the trot, there were also concerns that Derry looked more than capable of opening up the Kildare defence, when they left their own half of the pitch that is.

The home boys then exploded on the resumption, seven points in nine minutes, Kildare looked all over the place; midfield was completely over run with James Kielt playing like a man inspired.

Kildare were making silly mistakes, getting turned over time after time;  at one stage we feared we could be looking at a possible  six point defeat, or even worse.

To their credit the boys in green (why play in green when the opposition is in red?) stuck at it before getting to grips with the situation they finally showed their bottle forcing Derry onto the back foot.

David Hyland moved forward, Niall Kelly started to torment the defence and Neil Flynn showed glimpses of what we know he is capable of. Four points on the trot and The Lilies looked to be heading home with two more points in the bag.

Disaster struck, a free out was misdirected, Derry got their hands on the ball, sent it in high to the Kildare danger area. Mark Donnellan looked to have it but in came Emmet McGuckin to punch the ball into the back of the Kildare net.

The match official pointed for a free out but the umpires insisted it was legitimate and the goal stood.

What is it about Kildare and goals this term?

Remember against Cork a Daniel Flynn goal was over ruled by a linesman who claimed he had hopped the ball twice, video evidence has since proven otherwise; a Cork goal allowed when the player was clearly in the square and now Sunday’s late winner.

In fairness most felt McGuckin’s goal was legitimate. Some would be more concerned that first of all the ball was given away and secondly a forward was allowed to get in to punch it out of the Kildare keeper's hands.

Not the first time that sort of goal has cost Kildare,  remember back in McGeeney’s day ... no don’t go there, but that sloppy defending will have to be addressed and addressed quickly.

Still there  are lots of positives to take from the game but the mistakes, the  turn overs and even, on more than one occasion, the decision making, is in need of addressing.

It was really heartbreaking that having been cleaned out in midfield for over 20 minutes of the second half, Kildare  still had the wherewithal to gather things together, regain their composure, and the  lead, and then practically throw it away with terribly sloppy defending, beginning with a ball that should have been cleared when in Kildare’s possession.

Now it is time to move on.

A win would almost certainly cement Division 2 status and if that can be achieved, a push for promotion can then be tackled.

Both can still be achieved.

Two loyal Lily  fans were missing in action on Sunday but in fairness  Micheál O’Connor, of Sarsfields fame, and Annette O'Brien don’t miss too many games. However they had a legitimate excuse as they are putting the final plans to an upcoming event when they are (at last) about to tie the knot.

We wish them well.

But with a warning.

No more excuses for missing games will be tolerated!