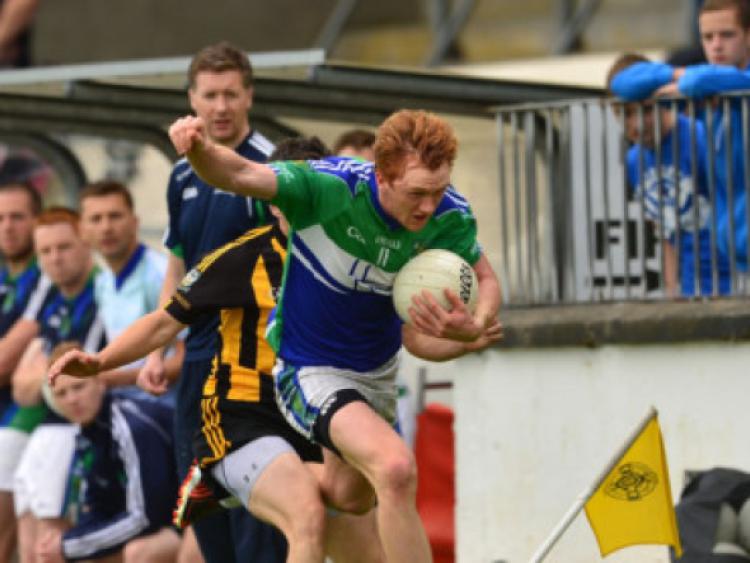 JOHNSTOWNBRIDGE opened up a bit of daylight at the foot of Division 1 of the senior football league and in turn left St Kevin’s languishing just one place and point off the bottom of it following victory in this relegation four-pointer on home soil last Saturday.

JOHNSTOWNBRIDGE opened up a bit of daylight at the foot of Division 1 of the senior football league and in turn left St Kevin’s languishing just one place and point off the bottom of it following victory in this relegation four-pointer on home soil last Saturday.

The hosts kicked the closing two scores of this low-key affair to claim this vitally important win in their fight against the drop, the hard-grafting Jimmy Farrell and Derek Donegan splitting the posts after 55 and 57 minutes respectively to the delight of the home support.

It was a cruel way for Kevin’s to lose the game, a game that they should really have taken more from if based on nothing more than how the possession was divvied up. Too often, however, Kevin’s end product - whether it was shot selection or decision making - left a lot to be desired.

Noel Mooney’s side, though, were the better of the two during the middle third of this, and after Barry Noone (free), Declan Flaherty and Mick Kenny kicked successive points following the half-time break, the men from Staplestown were 0-11 to 1-6 in front after 39 minutes, that after having trailed by four 20 minutes earlier.

A week after losing to Meath in the Leinster SFC and a week before their meeting with Down in the qualifiers, Kildare duo Sean Hurley and Paul Cribbin were both included in Johnstownbridge’s starting XV, with both prominent early on as the hosts appear to take reasonable control of the game.

Starting at midfield, Hurley saw plenty of early ball and got around the park with relative ease, while Cribbin - who started at wing-forward before moving inside to the edge of the square - contributed 1-1 before he was withdrawn during the break.

Niall Vaughan, Farrell, Ian McKeown and Seamus McNally all found their range during the opening ten minutes as Johnstownbridge coasted 0-4 to 0-1, before a Cribbin goal nine minutes later made it 1-5 to 0-4.

By that juncture Kevin’s were clawing their way back into the game and more economical with possession and finding their men far easier, particularly those closer to goal, four points on the spin by the 25th minute from Tom Barron and Barry Noone (three frees) restored parity at 0-8 to 1-5. Johnstownbridge’s first score in 10 minutes through Cribbin, however, handed his side a one-point lead at the turn around.

It was more of the same following the resumption, with Johnstownbridge going through the motions against a side who really should have dealt upon them greater punishment. That was prove Kevin’s downfall here, if not their eventual demise in a few weeks time when the league comes to an end.