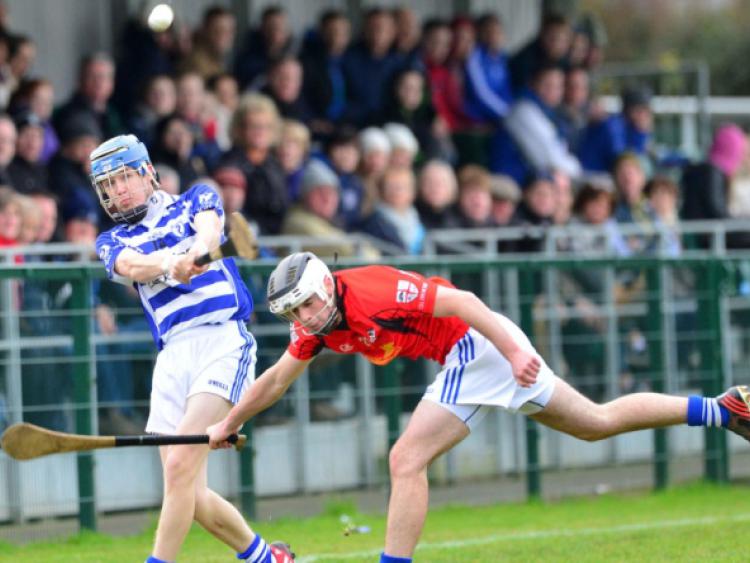 FOR the third year in a row Naas were crowned the Under 21 A hurling champions after a comfortable eleven point victory over Celbridge in Hawkfield last Sunday afternoon.

FOR the third year in a row Naas were crowned the Under 21 A hurling champions after a comfortable eleven point victory over Celbridge in Hawkfield last Sunday afternoon.

A strong second half performance and goals from Conor O’Hehir and Mark Nevin ensured that the Shane Casey Cup remained in the county town for another twelve months at least.

After the first 30 minutes the final destination of the trophy was difficult to call. Only a point seperated the team with Celbridge edging it 0-6 to 0-5 but after the turnaround it apparent very quickly that the holders were about to win it out once again and deservedly so.

Naas missed a lot of scoring opportunities in the first half but had two points from Conor O’Hehir on the board before Celbridge opened their account.

Niall Kenny grabbed Celbridge’s opening score but it was cancelled out by a point from Peter Moran.

By the 17th minute the teams were level with 0-17 apiece but Celbridge hit the front from the first time with seven minutes of the half remaining thanks to a point from a free from Keegan and left the scoreboard reading 0-4 to 0-3.

In a fairly lack lustre first period Celbridge managed to keep a one point lead heading for the break but the second half was all about Naas.

With just 50 seconds on the clock Naas pounced for goal. Celbridge ‘keeper Jordi Morrissey misjudged O’Hehir’s strike from 65 minutes out and allowed it in over his head and gave Naas a 1-5 to 0-6 lead.

A point from Peter Moran soon after extended Naas’ lead and gave them a superb start to the final half.

By the 39th minute Celbridge were still in contention, trailing by just two (1-8 to 0-9) but Naas turned on the class and dominated thereafter.

A converted ‘65’ from man of the match Sean Gainey extended their lead before O’Hehir and Philip Cocoman both raised white flags to leae the team in blue and white leading 1-11 to 0-10.

The second was almost a carbon copy of the first except this time Mark Nevin’s shot caught Morrissey off guard and it gave Naas a 2-17 to 0-12 victory. This was the second year in a row Naas inflicted final defeat on the side from the Hazelhatch Road.

Right, Naas captain Cormac Gallagher with the trophy after defeating Celbridge in the Tony Donohoe Trophies Under 21 A final at