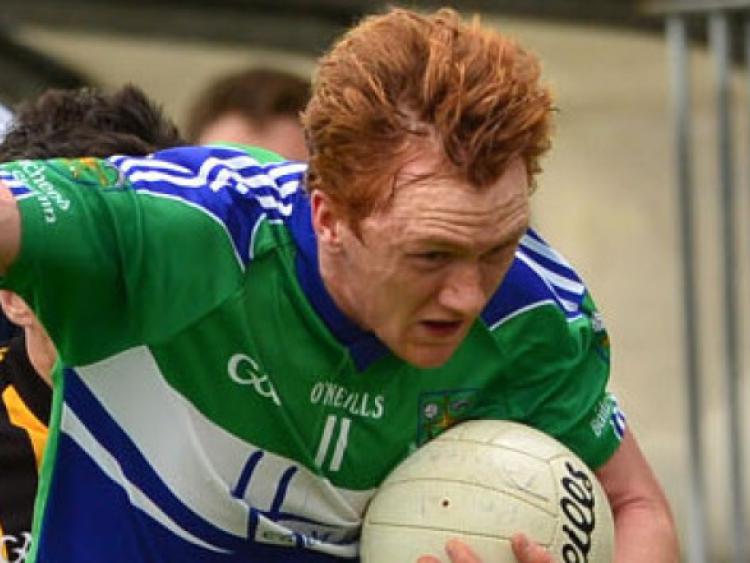 Hawkfield Centre of Excellence was the venue for this Joe Fox Tool & Plant Hire IFC Round 2 replay on Wednesday (14 August) evening before good attendance on an excellent evening for football.

Hawkfield Centre of Excellence was the venue for this Joe Fox Tool & Plant Hire IFC Round 2 replay on Wednesday (14 August) evening before good attendance on an excellent evening for football.

Round Towers had earned a second bite at the cherry on Sunday last when Richie Scahill scored a late equaliser from a free but like the drawn encounter it was Johnstownbridge who took the early initiative with two Keith Cribbin points (1free) inside a minute.

It took Towers all of eight minutes to open their account through Jason O’Brien.

Ten minutes in and the only goal of the game arrived when Luke Flynn, Paul Mooney and Seán Hurley combined before off-loading to Paul Cribbin who made no mistake from close range.

Hurley quickly added a point and Towers looked in trouble.

The Bridge were doing well around the middle, picking up a lot of breaking ball, coupled with some fine fetching by Barry McNally while the pace of the Cribbin boys were causing problems.

Thirteen minutes in and a brilliant long range point from Dean Houlihan left the score reading 1-3 to 0-2.

One thing Towers are noted for is hanging in even when things are not going their way and two fine points from Niall Cleary saw them reduce the deficit to two.

The Bridge, however, upped their game again hitting three points on the trot from Daniel Flynn, Eoin O’Donoghue and Cathal McNally.

Jason O’Brien kept Towers in touch on 25 with a white flag before a brilliant long range effort from Paul Cribbin made it 1-7 to 0-5.

Neil Scanlon converted a free but it was The Bridge boys who finished the stronger with two fine efforts from the impressive Cathal McNally, to make it Johnstownbridge 1-9 Round Towers 0-6 at the break.

Seán Hurley was first to raise a white flag on the resumption but Towers kept their faint hopes alive with points from Jason O’Brien and a lovely effort from Neil Scanlon from a tight angle.

Sensing danger The Bridge replied with both Keith Cribbin and Cathal McNally finding the range leaving it 1-12 to 0-8 after 39 minutes.

One felt even at this stage Round Towers needed a goal but in all fairness it never really looked like coming.

Neil Scanlon and Daniel Flynn exchanged scores as we reached the mid-way point.

It was from here that the Kildare town boys threw caution to the wind and for the last quarter dominated possession.

A quick free by Richie Scahill saw Paul Cornish fine a gap in the defence but his effort was knocked over by keeper Ian Farrell.

Neil Scanlon quickly added a free and when Richie Scahill won a ball that never looked like his and knocked it over it left just four between them (1-13 to 0-12) after 47 minutes.

Cathal McNally eased the growing concerns of JTB but again Towers responded with two Richie Scahill frees to reduce the deficit to three with four minutes plus remaining.

Towers continued to attack and while they had a few opportunities, both from frees (long range) and open play, they failed to get any closer and the final whistle arrived with Johnstownbridge booking their place in the quarter final while Towers now take on Eadestown in Round 3.

A very entertaining game with some fine football from both sides.

Hot favourites Johnstownbridge should come on from these two games and remain on course to finally lift this much sought after title but there is little doubt that Round Towers will still have a big say before this 2013 championship is finally decided.