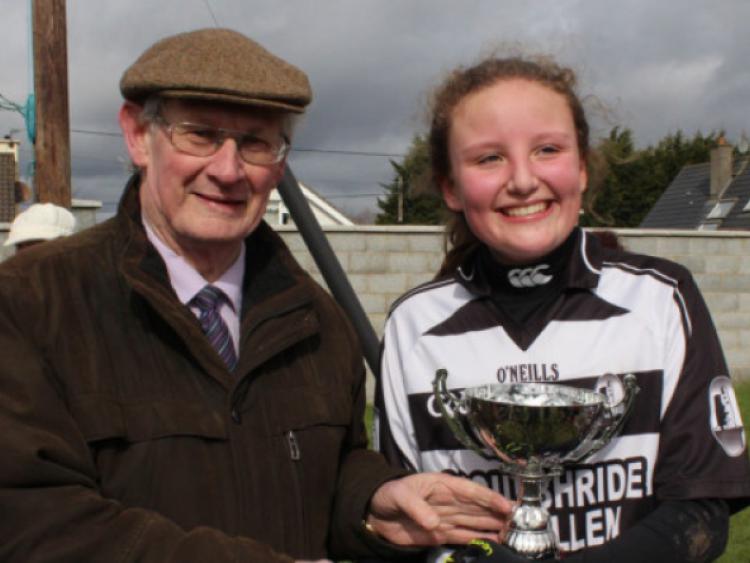 They raced out of the gates and grabbed the first points of the game through Leah Doran, Aisling Murphy and Megan Rainey.

Rathcoffey though managed to regain their composure following that difficult start to the game and they went to the half time break on level scores after Ciara Troy Muldoon raced onto a long ball out of defence and beat Leanne Farrell in the Johnstownbridge goal.

They weren’t able to add to their scoring tally in the second half though as Johnstownbridge once more dominated proceedings.

With Nicole Farrell having a fine game, Johnstownbridge added a goal from Murphy and an excellent point by Rainey to ensure their place in the final.

Kilcullen and Monasterevin played out a thrilling semi final that went all the way to extra time but in the end, the brilliance of Molly Aspell and Abbie Smith won the game for Kilcullen.

Abbie Smith grabbed a sensational hat-trick as Kilcullen held off the challenge of Johnstownbridge to lift the girls mini 7’s title in Ballymany.

The nippy little forward had been on the mark in the extra time semi final victory over Johnstownbridge and she carried that form into the final.

Kilcullen started the game well and Smith was set up by her forward partner Sally Murphy who was unfortunate to see her shot go just past the post. Her team were in the ascendancy though and the Murphy-Smith pairing combined again and this time Murphy gave goalkeeper Leanne Farrell with no chance.

Johnstown-bridge just couldn’t clear their lines at this stage and Smith looked dangerous with every forward pass. She grabbed the first of her treble with a fierce finish from a tight angle.

As the half drew to a close, Johnstownbridge gave themselves something to cling to when Aisling Murphy converted two frees.

Those couple of scores gave the ‘Bridge renewed hope and they started well after the restart. Aoife Newman pointed and then set up Megan Rainey to score a goal that tied the scores.

The game was very much in the balance at this stage but Smith took it by the scruff of the neck. Just moments after Johnstownbridge had got back level, Emma Keane fed her a pass and Smith showed great pace before finishing well.

She went on to grab her hat trick following Murphy’s pass and she was just too hot for Johnstownbridge to handle.

Molly Aspell completed the scoring and secured a deserved win for Kilcullen which they celebrated in style at the final whistle.