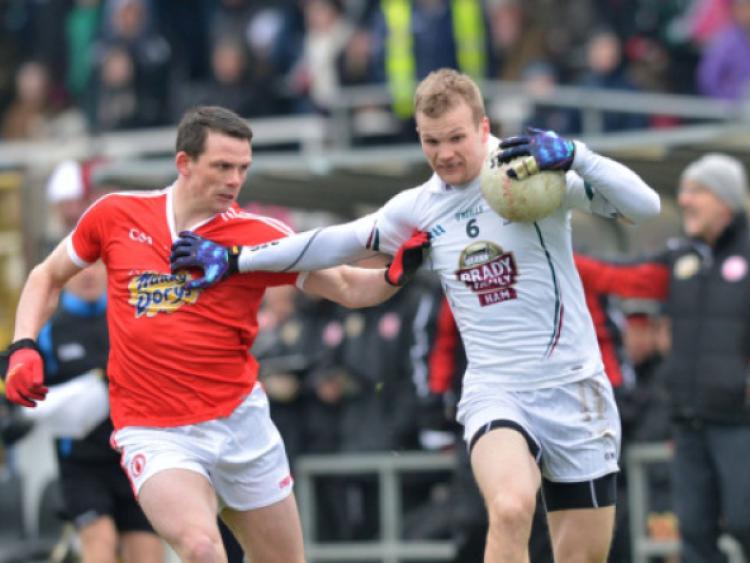 KIERAN McGeeney refused to cast a disappointed figure following Kildare’s league defeat at home to Tyrone last Sunday, the second defeat the Lilywhites have tasted in their last three games. They are however, assured of a league semi-final berth after results elsewhere in Division 1 went in their favour.

KIERAN McGeeney refused to cast a disappointed figure following Kildare’s league defeat at home to Tyrone last Sunday, the second defeat the Lilywhites have tasted in their last three games. They are however, assured of a league semi-final berth after results elsewhere in Division 1 went in their favour.

“It was encouraging from some points of view apart from the shooting aspect of it,” admitted McGeeney, who fielded a much changed team from that which defeated Mayo eight days previous. “We tidied up a lot and Sean (Hurley) and Paul (Cribbin) made huge impacts when they came on – it’s good to know that there is that type of running there.

“There’s probably a few more positives to take out of it than negatives today. There was an eight minute spell in the first half when we were right with them considering the breeze but Emmet (Bolton) knows himself that he made a terrible mistake coming out (with the ball) and giving them a goal and that bit of a cushion.

“We would be disappointed enough with the first half in that we didn’t get more scores and more shots off but they knuckled down well in the second half.

“The disappointing thing for me in the first half is that we didn’t take more shots; yes, there was a breeze there but we could easily have taken more shots and against a team like Tyrone you have to take shots, because at the very least you don’t want them counter-attacking you and we weren’t doing that.

“In the second half I think we had twice as many shots as they had but just couldn’t put them away. To have the guts of 20 shots and not to come out with more scores is obviously something that we have to work on.”

“But if someone had told me at the start of the year that we would be sitting like this (into semi-finals) then I would have taken hand and all off.

“Outside of the Dublin game we have completed really well; we have learned a few different things about who can play well. We have a settled team coming through now too, which is difficult considering that we have two teams there.”

Absorbing most of McGeeney’s praise were Johnstownbridge club-mates Sean Hurley and Paul Cribbin, the young guns who were introduced for their league debuts after 26 minutes and half-time respectively.

“They were brilliant and it probably shows how the modern game is going, in that you need pace and you need a lot of it,” said McGeeney.

“Paul scored three points and he missed three that he should have got but there is encouragement.

“I’m not trying to belittle the fact that we are disappointed but I would feel that we should have got a lot more out of the game considering the amount of possession that we had in the first half and the second half.”

McGeeney rested U-21 trio Niall Kelly, Paddy Brophy and Daniel Flynn due to a hectic recent spell of fixtures, whilst acknowledging that the immediate future of Kildare football could well be built around the likes of the young men from Athy, Celbridge and Johnstownbridge.

“If you are good enough you will be there,” in response to U-21s playing in the summer,” continued McGeeney.

“Like everything we will all be measured in the summer – no point really in saying that someone is good now. It is very easy to say things now but come the summer it is a different ball game, in that there is a lot more intensity for starters.”

One player who is struggling to get back to fitness is veteran Dermot Earley, whose back injury sustained in the warm-up prior to the Dublin game nearly three weeks ago showing no sign of improving. Johnny Doyle (shoulder) is not a long term casualty, while Daryl Flynn’s return after a lengthy absence will hinge on how much game time he manages to get under his belt in the coming weeks.