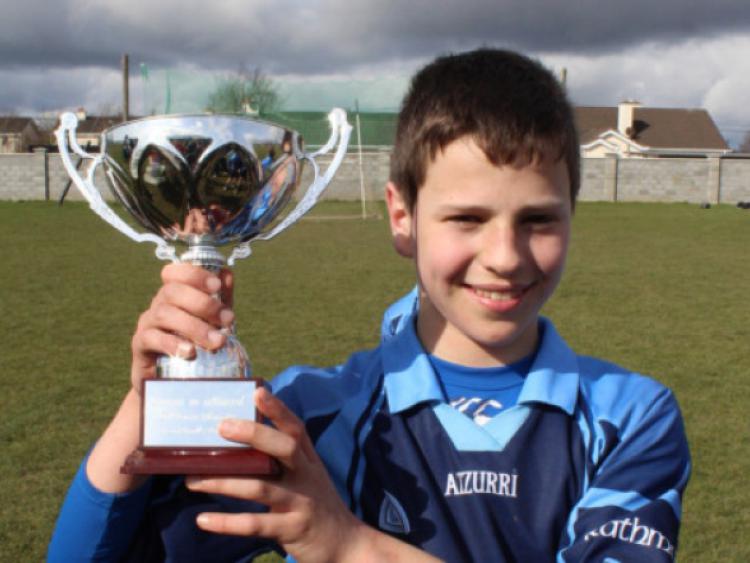 Rathangan left it late but a last gasp goal by Muiris Curtin secured their path into the semi final. It was tough on Two Mile House and in particular goalkeeper Liam Coleman after he made a string of spectacular saves.

There was little to choose between these two team but in the end, Maynooth’s greater ability to take a point proved to be the difference.

A rampant Rathmore side, for whom Aidan Cassidy and Eoin Conneff shone, powered their way past Kilcullen and into the semi finals.

Ballymany marked themselves down as a team to keep an eye out for with a comprehensive victory over a hapless Broadford side. The game was as good as over as a contest inside the opening half.

Although they weren’t as impressive as during their quarter final win, Rathmore proved to be too strong for Maynooth as they booked a place in the decider.

Ballymany and Rathangan produced an entertaining semi final but it was Ballymany who deservedly made the final.

Ballymany were denied in their efforts to lift the boys mini 7’s title by a brilliant individual performance by Eoin Conneff.

The Rathmore forward finished the game with all his team’s scores and in the end proved to be the difference between the teams.

The Newbridge side settled quickly into the game and Jack Casey opened the scoring with a terrific point on the run but Rathmore responded well.

Only a couple of bad finishes from good positions stopped them from levelling things up immediately.

Ballymany could only hold out for so long though and Conneff hit his first goal of the game when following up on the rebound after Aaron Fox saved his first effort.

Conneff was into his grove now and he grabbed his second goal shortly after when Ballymany once again had no answer to his blistering pace.

Ben Scanlon and Cian McHugh hit points for Ballymany but they were fortunate to not fall further behind when Shane Sargent’s low shot hit the foot of the post. But Rathmore remained were still in good health with a 2-0 to 0-3 half time lead.

Conneff registered the first point of the second half but then it was Rathmore’s turn to be thankful for the woodwork. Ben Scanlon’s well struck effort was heading towards the top corner before Adam Lee magnificently tipped the ball onto the crossbar.

The game was all about Conneff though and he hit a goal and a point to more or less finish the game as a contest. Jack Casey and Shane Walsh landed points in the closing stages but they were a mere consolation for Ballymany who went down to the might of Conneff.