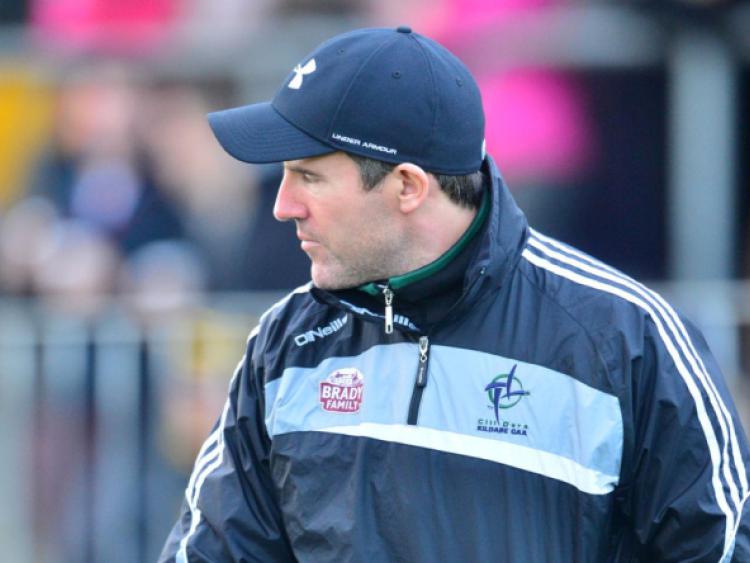 Asked what could he take from his side’s facile victory over AIT, Jason Ryan’s response was: no injuries!

Asked what could he take from his side’s facile victory over AIT, Jason Ryan’s response was: no injuries!

His statement sums up Kildare’s O’Byrne Cup opener yet Ryan, naturally, was pleased with the win.

The Waterford native was pleased to have got a look at new players and that’s what he will be using the next two games for.

“It’s a big trial time for us. We played Tipperary this morning with another team so we have a lot of players we’re trying to get a look at. Whether you win by a lot is irrelevant, it’s about getting games, about boys getting ball in their hands. You can play as many friendlies and as many games among yourselves as you want but playing a competitive game at whatever stage in the season is great,” admitted Ryan.

The former Wexford manager took positives from the performances of new players but was keen to point out that very little could be read in to such a one sided affair.

“I’m happy with the new guys. It was great seeing those fellas and they all contributed. There wasn’t any passengers. The score was huge and we’re under no illusions, it wasn’t a difficult game. We’re delighted to win.

“The fact that the guys that came in kicked scores is pleasing because it will give them confidence going in to the next game,” he explained.

Up next is a meeting with Longford tomorrow evening and Carlow come to Newbridge on Sunday. The aim is to win both and hopefully retain the title.

“Our aim is to win two more games and have another competitive game the following Sunday. We’ll go in to those games training but at the same time you want to win them to have that semi final place,” remarked the manager.

Ryan says his biggest challenge is getting players fit and picking a starting XV for the NFL without a number of high profile players.

“The biggest challenge is getting the 18 or 19 fellas that weren’t here today back playing as soon as possible. We have to also deal with the fact that a lot of the guys we’d like to be playing in the league won’t be and just get on with it,” he said.

Just one black card was shown over the course of the 70 minutes and the new rules came without incident but Ryan was still concerned ahead of the game.

“We did have concerns. In the match this morning we had Cormac Reilly from Meath refereeing and we played Wexford before Christmas and we got Eddie Kinsella to do it because we felt these are the guys that are high profile and should know what the black card is going to be used and not used for. We’ve worked to try and educate the players. I think they learned more from Brian Kinahan from Athy than from anybody else. He lasted about four or five minutes against Wexford. You don’t want to be sitting on your ass for the rest of the game so he educated the others!”

So another season has kicked off. The expectations from supporters are still high and the desire from players is even higher admits Ryan.

“I’m from outside and the desire to play for Kildare is incredible. If they really want to play you have to give them every opportunity. “