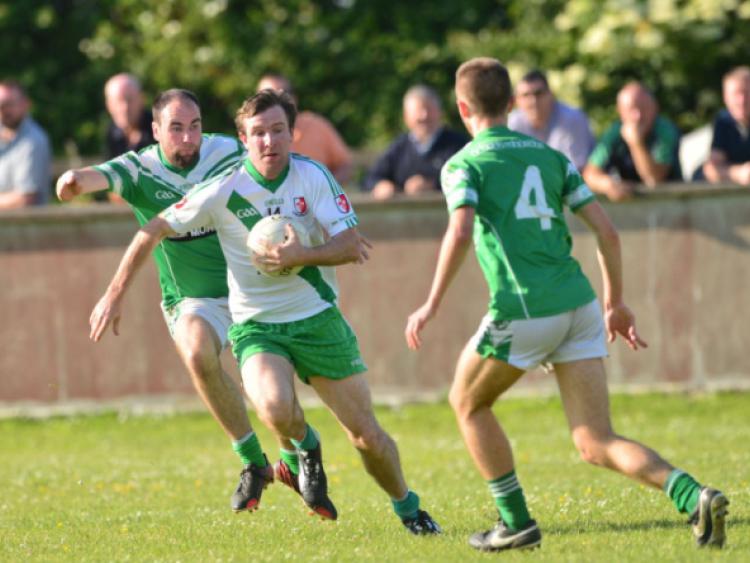 This Leinster Leader SFL corresponding fixture last season saw a six goal thriller ending with a one point win for Sarsfields. However, on Saturday last in Moorefield, despite being a fine game, played in great spirit, it was Moorefield who dominated from start to finish winning by all of eleven points and if the truth be told it could (and should) have been ever more.

This Leinster Leader SFL corresponding fixture last season saw a six goal thriller ending with a one point win for Sarsfields. However, on Saturday last in Moorefield, despite being a fine game, played in great spirit, it was Moorefield who dominated from start to finish winning by all of eleven points and if the truth be told it could (and should) have been ever more.

With both sides missing some of their more established stars, the home side took control, playing against a stiffish cross field breeze, they gained supremacy in the middle where Ryan Moore and Cian O’Connor held sway for most of the game, they quickly opened a four point lead before Sarsfields opened with a Ray Cahill free after seven minutes.

Showing more urgency, two Cian O’Connor points saw the gap throw to five before Ray Cahill hit four points for the visitors (three frees) but with Moorefield raising white flags from Eanna O’Connor, Ciarán Kelly and Roli Sweeney they led by 0-8 to 0-6 at the break, Michael Browne getting the final point of the half for Sarsfields.

With the breeze favouring the side playing into the dressingroom end, Moorefield took over from the throw-in of the second half.

Two Adam Tyrrell points and another from full forward Ciarán Kelly stretched the lead to 0-11 to 0-6 before the first and only goal of the game arrived on 38 minutes.

A monstrous kick from some 65m from Cian O’Connor looked to be going over. However Sash keeper, Patrick O’Sullivan got his hands to it but could not hold on to it and Niall Hurley Lynch was in like a light finish it to the net.

Barry Coffey had a goal chance for the visitors but his blistering show went to the right of Tom Corley’s post and wide as Moorefield continued and but for some wild shooting could have added another five or six points.

O’Connor (Eanna), Cris Crowley, Roli (2), Hurley Lynch, Eamonn Callaghan all added points before Sarsfields finally opened their second half account with a Barry Coffey free, the same player added another with Cian Byrne getting another to leave the final score reading Moorefield 1-17 Sarsfields 0-9.

The only black card of the night was handed out to Mark ‘King of the Tweeters’ Murnaghan who lasted just 70 seconds before returning to the Moorefield dugout somewhat chastened,

Roli Sweeney accepted the Timmy Durney Mick O’Keeffe Memorial Cup from Helen Durney after the game. This cup is presented annually to the winners of this league clash.