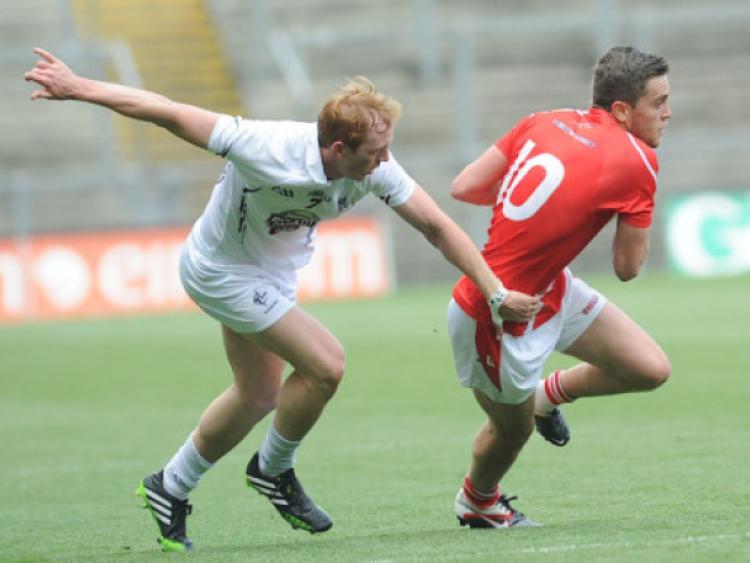 It’s six years since Keith Cribbin made his senior debut for Kildare but the recent Leinster quarter final was only his second ever appearance for the Lilies in Croke Park.

It’s six years since Keith Cribbin made his senior debut for Kildare but the recent Leinster quarter final was only his second ever appearance for the Lilies in Croke Park.

He was only 18 years old when Kieran McGeeney named him in the started XV for Kildare’s first round meeting with Wicklow at headquarters on May 18, 2008 but he fell out of favour thereafter.

Cribbin spent 2012 travelling in Australia but having won the Intermediate Football Championship with Johnstownbridge last year, the older of the two talented brothers has worked himself right back into contention and indeed started at wing back against the Wee County the last day out.

“I was a surprise inclusion in ‘08, no one more than myself was surprised. I don’t really know what the difference between then and now is. Maybe it’s because I’m more mature. When I was thrown in in 2008 I was only 18.

“I knew I was playing well with the club but I never really expected to get a call up with Kildare at that time. Once I got in there I knew I wasn’t out of place though. I know myself my performaces weren’t good enough but I now I’m fully focussed,” admitted Cribbin.

He added: “I suppose I fell out of form. I went to Australia then for a year and enjoyed myself out there! Since I’ve come back I’ve really put the head down.I’ve been playing at wing back and I much prefer playing there, rather than in the forwards. I’m just giving it my all.”

In 2007 Cribbin was part of the St Mary’s Edenderry school team that won the All Ireland B title, beating St Eunan’s of Donegal in Breffni Park. Also on the team was his brother Paul, Sean Hurley and Cathal McNally and Cribbin believes the work of manager Emmet McDonnell, now in charge of Offaly and Johnstownbridge, along with that of Paddy O’Donoghue, Barney McNally and Shane Flanagan is the reason the Bridge finally tasted success last year and also why so many of the club’s young stars have progressed on to the Kildare senior team.

“The school, St Mary’s, and Emmet McDonnell in there, would have put a huge amount of work in and then we had good trainers like Paddy O’Donoghue, Barney McNally and Shane Flanagan. We were all brought up at the same time and what’s good about our team, especially with myself and Paul, is that he’s trying to be better than me and I’m trying to be better than him, and that keeps us going,” he explained.

“There’s no secret really! Sean (Hurley), Paul (Cribbin) and Daniel (Flynn) all had experience of being in Australia but then you have Cathal, who is a work horse and is sometimes taken for granted but he’s brilliant.”

Living in Meath, Cribbin is all too familiar with the Royals’ style. Louth were brushed aside but the Johnstownbridge man is expecting a much, much more physical battle at headquarters.

“Meath are going to be unbelievably physical. They have plenty of experience there and I’d know a few of the lads as well so it’s a big step up for us but it’s one we’re looking forward to. They are very dangerous up front and we know we have a big, big task ahead.

“My memories of playing Meath are about how physical they are, they’re always good around the middle and they have a tradition of good forwards. Mickey Newman is flying and you seen them against Carlow when they scored seven goals so it’s going to be a huge task, especially defensively,” said Cribbin.

With his brother recovered from the injury that ruled him the last day they could well be fighting for the one position. Now that’s good old family rivalry at its best!