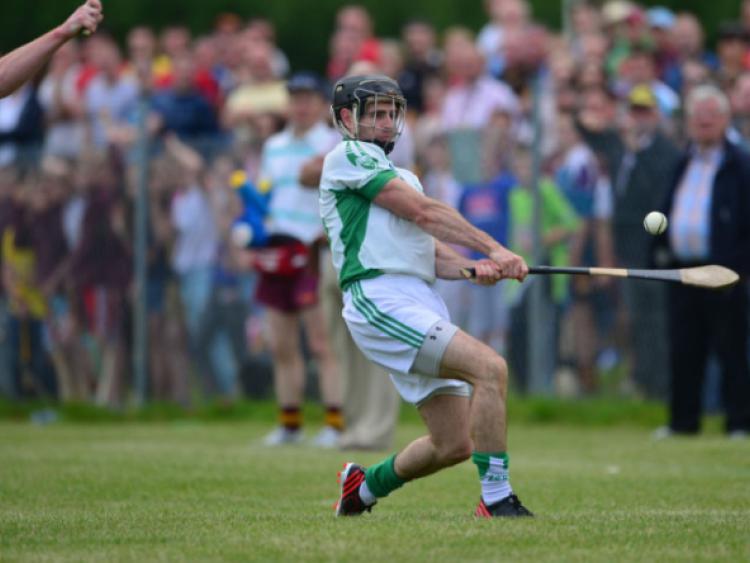 A goal from Michael Divilly late in the first half proved crucial as Confey lifted the Senior Hurling League Division 1 title in Clane last Sunday evening.

A goal from Michael Divilly late in the first half proved crucial as Confey lifted the Senior Hurling League Division 1 title in Clane last Sunday evening.

The Leixlip based boys survived a second half onslaught from Stuart Gleeson’s Eire Og, who were guilty of some poor finishing despite dominating the possession stakes.

Confey started without their Christy Ring Cup winner Paul Divilly but it hardly effected them as they held a 1-8 to 0-7 interval lead.

Divilly did make an appearance in the second period and indeed was lucky not to have been sent off just two minutes after his introduction for a pull on EOCC defender Richie Whelan.

With less than a week to go before the start of the Senior Hurling Championship, it was Eire Og Chorra Choill that drew first blood when midfield man Paul Kennedy split the posts in the second minute but that lead was short-lived as Darragh Nolan fired over the leveller for Confey soon after.

It was nip and tuck during the early stages and after 13 minutes the sides were deadlocked with four points apiece.

Three points without response courtesy of Michael Divilly and a brace Mark Fennelly to leave the score at 0-7 to 0-4 with 23 minutes of the first half played.

When Eire Og’s Paul Kennedy was impeded a minute later Declan O’Toole converted the resultant free to reduce Confey’s advantage but there followed 1-1 for the three time SHC winners. The point came from the hurl of Mark Fennelly from a free, while the goal came courtesy of Mick Divilly.

A ball in from the right from Kieran Divilly was broke to Michael Divilly and he finished to the net to give Confey a 1-8 to 0-5 lead.

In fairness to Eire Og, they responded well. From the puck out they won a free and O’Toole converted, while Evan Dempsey was their first forward to score from play on 30 minutes and it left the interlude score at 1-8 to 0-7.

Eire Og were clearly buoyed up for the second period but ultimately fell short thanks in no small part to some poor finishing.

Mark Fennelly extended Confey’s lead with a point five minutes in, followed by one from goalscorer Divilly, while down the other end EOCC were racking up the wides and letting goal chances go abegging.

Substitute JP Crotty did raise a white flag in the 37th minute but Joe Dempsey failed to hit the net despite the chance being put on a plate for him by his son Evan.

A lovely score from Evan soon followed though and it left the score at 1-10 to 0-9 and it was looking increasingly likely that Eire Og weren’t going to bridge the gap.

Darragh Nolan split the posts for Confey with 48 minutes, while O’Toole sent over a free down the other end.

In fact those points completed the scoring for the evening and all that was left was a Paul Dermody free to be blocked on the line and for Confey ‘keeper Ian Baker to save another EOCC goal bound effort.