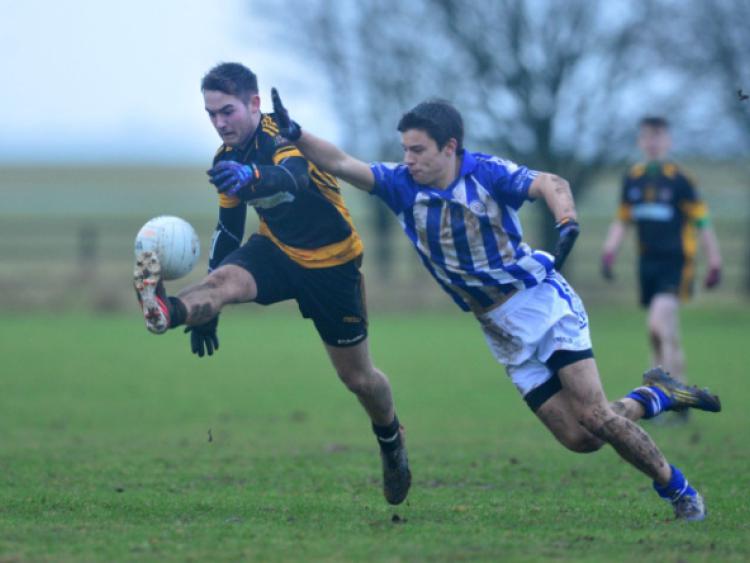 Despite trailing Wexford’s Good Counsel by six in the second half, a late rally seen the Partrician Secondary School within only one, before finishing up two adrift.

Despite trailing Wexford’s Good Counsel by six in the second half, a late rally seen the Partrician Secondary School within only one, before finishing up two adrift.

It was the home side that opened the days scoring with points from Ryan King and Ben McCormack had the Patricians two points to the good with five minutes on the clock.

Good Counsel were quick to reply through full forward Sean Ryan. John Walsh soon had the sides level before an Aaron Diskin follow up found the bottom corner of Conor Earley to send them three points to the good at the mid way point of the half.

Two Sean Ryan frees in the 18th and 20th minute had the Newbridg PBS side on the ropes as the slipped five points behind after failing to find the sticks since McCormack’s fifth minute point.

With seven minutes remaining in the opening half up stepped McCormack once again to ensure the PBS would not go into the break with leaving Good Counsel with something to think about.

On the restart it was obvious to the watching support that the Partricans needed to be quickest from the blocks. With four minutes played this is exactly what occurred.

A third point from the boot of McCormack had only Aaron Diskin’s goal separating the sides. As the Partricians began to gather a head of steam Good Counsel inched forward to quell any ideas of a home town comeback.

Two points from Ryan had the deficit quickly back out to five points, cancelling out all of the good work put in by the Partricians’. Donnacha O’Connor pointed to send the New Ross school six points clear.

Despite having a mountain to climb and only 17 minutes on the clock, they failed to crack under the pressure and pushed forward to begin chipping away at the lead.

Again it was McCormack who was to the fore as he lofted over his fourth of the day, this coming by way of a free.

Following it up two minutes later, McCormack ensured his fifth would come from play as the sides entered the final 15 minutes with four between them.

Assisting McCormack with the days scoring King floated over his second of the occasion to leave Aaron Diskin’s goal the difference once again.

In reaction to this half time sub Adam Burke decided it was his turn to get in on the act. With twelve minutes remaining he put two points between the sides.

Not to be out done McCormack proved his scoring credentials hitting his final point of the day with nine minutes to play.

This left just one between the sides, as McCormack finished the day hitting six out of his sides nine point tally.

A point from Donnacha O’Connor rounded off the days scoring to ensure that the Newbridge outfit follow Athy’s Ardscoil Na Trinoide out of the Leinster Schools Senior Football ‘A’ Championship.