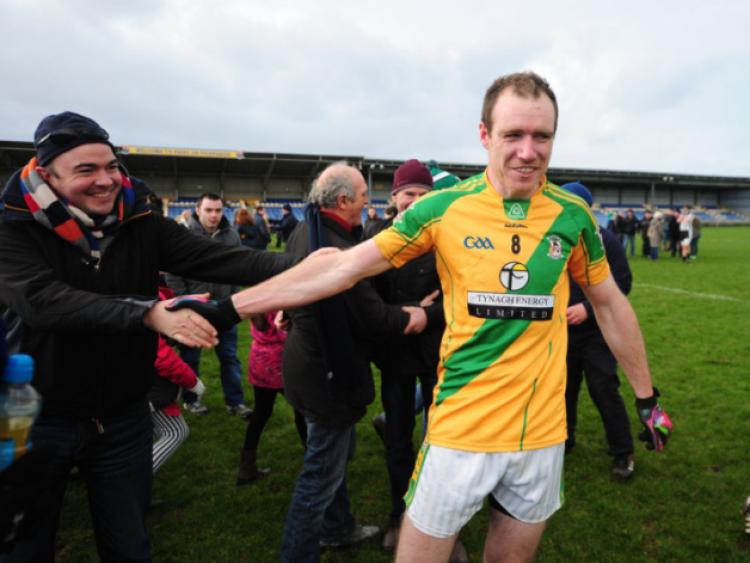 When Ciaran Gravin scored a injury time goal to give Clogherinkoe a 2-10 to 2-8 victory in the Junior Football Championship final of 2012 Derren Casey was devastated. Yet again Two Mile House had come up short and he’d had enough.

When Ciaran Gravin scored a injury time goal to give Clogherinkoe a 2-10 to 2-8 victory in the Junior Football Championship final of 2012 Derren Casey was devastated. Yet again Two Mile House had come up short and he’d had enough.

After that defeat Casey seriously considered packing it in. With a young daughter at home and another one on the way at the time, he wasn’t sure football was worth the hardship anymore.

Derren had been playing senior football for the House since 1996 and won just one trophy, a SFL Division 3 title in 2008. The big one eluded them on so many occasions and Casey was sick of it.

“I was in a bad place in 2012 after Clogherinkoe beat us in the final. I was 33 years of age and married with two kids and I wasn’t sure if I was able to keep slogging away,” admitted the midfield man.

Luckily it was emotion talking in the aftermath of that defeat. Casey decided to give it one more go and he sure is happy he did.

“We all had a meeting up in the hall for four or five hours and I decided to give it another go. Everybody just let everything go that night and we got back in to it in the January and give it a good crack.

“It was probably emotion talking after the Clogherinkoe game. In fairness to my wife she told me to stay at it but you keep wondering will it ever happen. Now everything has happened and it’s amazing,” he explained.

Good things come to those who wait they say. And lord know the House waited. And waited. And then waited some more.

Then came the 2013 season and an array of trophies. They finally got their hands on the JFC title but also claimed the Dowling Cup, the league and the Jack Higgins Cup in December. And that was just for starters.

“It was a combination of things. The years of hurt made us finally get our house in order. The combination of older players like myself, Donal Browne, Aidan Dowling, Matt Kelly and Niall Browne and the new guys has made the balance right,” Casey told the Leinster Leader.

Of course manager Jarlath Gilroy has played a massive part in their success, says Casey. The Ballymore man brought a wealth of experience to his neighbouring club and perhaps without him the House’s trophy cabinet might not be packed to the gills as it finds itself at the moment.

“Jarlath is a seriously operator. My father was chairman at the time of his appointment so I had a little bit of inside info and when he told me he was meeting Jarlath I couldn’t believe it. I was delighted. He had won a championship with Ballymore and he done it all as a player and I had a lot of respect for him. I didn’t know him personally but he came in and gave us all a clean slate and everybody had to prove themselves,” said the father of two.

Prove themselves they certainly did. Winning a county title was paramount for Casey. He didn’t look any further and probably didn’t have the appetite for a Leinster Championship campaign. He was content with his lot but Gilroy wasn’t.

“We said at the start of the year that we didn’t want pressure on us but obviously there was. There was massive pressure on us and trying to get it out of your head is hard. When we won it was funny because afterwards we were all in the dressing room celebrating and Jarlath Gilroy stood up and said that we weren’t finished.

“As players we were probably just relieved that we finally won a Kildare junior championship title but Jarlath had us back training on the Tuesday. There was some sore heads at that session I can you!” joked Casey.

The House soon after got their hands on a Leinster title when they beat Louth kingpins Huntstown Rovers in the final in Newbridge and they knew then that just 60 minutes of football stood between them and an All Ireland final appearance.

“It all took off from there. We went up to Navan and beat the Meath champions and played very well that they and after that we decided to give it a good crack. We played with a bit more freedom because there was no pressure on us,” admitted Casey, who played his underage football with Allenwood.

Without their former All Star defender Peter Kelly, Two Mile House headed for Pearse Park in Longford to take on Emyvale of Monaghan in the All Ireland semi final. A last gasp point from Casey’s midfield partner Niall Browne gave the Kildare side a narrow victory and booked them a place in the final and it still hasn’t sunk in yet.

“It hasn’t even sunk in that we’re going to be playing in Croke Park in an All Ireland final. It’s unbelievable,” Casey said.

“Browne (Niall) carried us a lot in the semi final and he deserved to score the winner. He’s put in so much work this year and last year as well.

We didn’t really mind when they (Emyvale) scored the two goals because it was early and we had time to pull it back. John Goff, who has played great all year, made a serious save and if it hadn’t been for that we could have been in trouble.

Obviously Niall (Browne) and Chris (Healy) were phenomenal on the day but I think everybody, one to 15, stepped in up with Peter (Kelly) out,” he remarked.

The only time Derren Casey got close to the Croke Park turf was on a school tour he says. On Sunday he’ll be playing on it. It’s a big deal for a junior club player. Huge even. On the Monday Casey will take to the skies as he travels to New Zealand for his brother’s wedding. Wouldn’t the All Ireland trophy make a great centre piece on the top table?kk