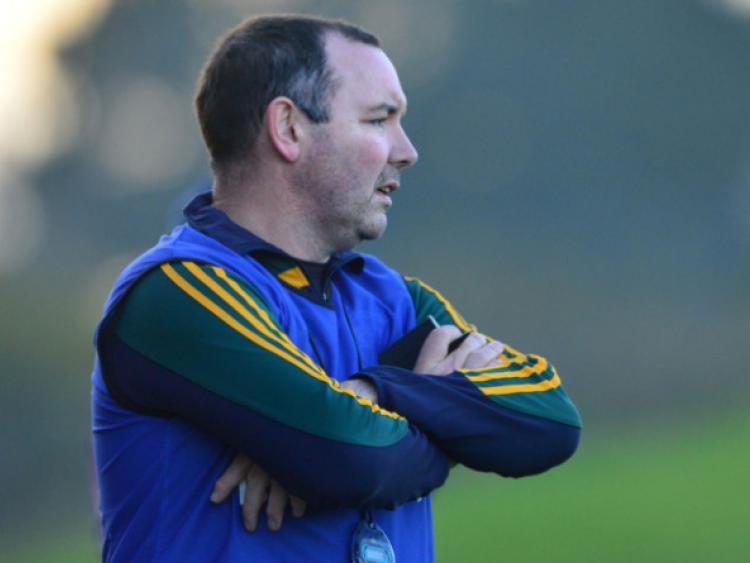 In 2010 Jarlath Gilroy lead his own Ballymore Eustace team to Intermediate Championship glory. In the same season they claimed a Leinster club title but they fell at the penultimate round in the All Ireland competition.

In 2010 Jarlath Gilroy lead his own Ballymore Eustace team to Intermediate Championship glory. In the same season they claimed a Leinster club title but they fell at the penultimate round in the All Ireland competition.

A couple of years later the former Kildare star moved on and took the reigns of neighbouring club Two Mile House, a club striving for Junior Championship success. The House were hoping he was the answer to their prayers.

It’s a good job patience is plentiful in Two Mile House because Gilroy didn’t deliver what they wanted most in his first year in charge. Clogherinkoe came in and spoiled the party and departed for the IFC. Hope springs eternal, as the saying goes and 2013 began in earnest. Once again Two Mile House were the front runners for the JFC. Nothing new there. Little did they know, or anyone else for that matter, just what was to come.

First came victory in the Dowling Cup, followed by league success and then it was on to try and win the title that eluded them for so long. They were on a roll it seemed.

Finally, after years of hard luck and disappointment, glory was theirs. Straffan fell victim to the House in the final in Newbridge. It was time to sit back and savour their acheivement. Or was it?

Gilroy wasn’t finished though. He wanted a crack at Leinster. Meath’s Drumbarragh and Fenagh from Carlow were disposed off and a final spot was booked. Louth’s Huntstown Rovers came to Newbridge for the provincial decider and went home with their proverbial tails between their legs. Two Mile House had claimed a Leinster title.

Before Christmas another trophy was secured when they won the Jack Higgins Cup but the big game on the horizon was the All Ireland semi final against Emyvale from Monaghan.

A last gasp point from man of the match Niall Browne is what gave Gilroy’s side a famous win. They became the first ever team from Kildare to reach an All Ireland club final. What an achievement, what a season following years of being the nearly men.

Taking every game and competition as they came says Gilroy. Introducing fresh blood in 2012 was also crucial says the Ballymore man.

“We set out to do the business the first year but we had brought in so many young lads that it was always going to be difficult.

“If I’m not mistaken we probably tried out eight guys that were 17 or younger in the league and three or four of them in championship. Although we got beat by Clogherinkoe I knew that they were only going to get better,” Gilroy told the Leinster Leader this week.

“Blooding those players last year is probably the main thing. They got a taste for it and they were well able. They have no knowledge of defeat and that was very important. They had a winning mentality coming in and that rubbed off on the older fellas. The experience of the older fellas should be rubbing off on the younger fellas but it was the young lads that put the enthusiasm back in to the senior players.

“We started at the beginning of the year and said we’d try to win the first competition. We did that and then set our sights on winning the league, then championship and just keep going.

It’s a cliche but that’s the way you have to do it. When we were playing Dowling Cup back in March there was no point in talking about championship,” added the former Kildare minor boss.

Gilroy and his team have given parish a major boast. The excitement ahead of Sunday’s final in Croke Park has reached fever pitch. The bunting is up, the flags are out and even mass is being moved to accommodate the team and supporters.

“Fr Paul came up to me and asked me what time do we want mass at! So the football club has changed the time of mass in Two Mile House on Sunday!

He rang me to ask what time we expect to leave at and he told me he’d work back from that!” quipped Gilroy.

That’s how much is means to people in the village. It’s a massive deal and rightly so. For the older player that have tolled year on year out it means the world too.

Many of them could have walked away after the disappointment of 2012 but they didn’t. And Gilroy is relieved they stuck around.

“This is what lads play for. If you look at Derren Casey as an example. He’s been playing since he was 15 and before this year he only won one medal and now he has five in his pocket. To think that he went so long with so little and I’m sure he thought of packing it in,” explained the manager.

It is indeed what players play for. One player that won’t be playing on Sunday is star defender Peter Kelly. He might be well used to the dizzy heights of Croke Park with the county team but Gilroy says the former All Star is gutted he’s misses out on lining out with lifelong friends at headquarters.

“Peter is devastated and I’m absolutely devastated for him. For us to lose a man of his calibre and ability is a huge thing. He’s a real good club man. He might not be able to play in all the games but if he’s not involved with Kildare, he’s sitting on the sideline in Two Mile House at all Dowling Cup games and league games. The only time he’s not there is when he genuinely can’t be,” admitted Gilroy.

“I nearly thought at one stage he was going to try and come on against Emyvale! He took the tracksuit bottoms off, he was in the shorts and socks and I was waiting for him to tell me to put him on!

“It’s unfortunate because he was playing so well for us but to be fair Willie Burke put in a masterful performance at centre back in the semi final and the rest of the guys just raised their game. Maybe at times we’re over reliant on Peter and other lads can switch off a bit,” he added.

None of the players switched off in Pearse Park during the semi final and thaat’s for sure.

The House recovered from two goals early in the second half to win by the narrowest of margins and while Kelly was of course missed, those on the field were resolute in their intention of making the final, in particular captain Niall Browne.

“Niall is capable of that every day if he wanted to. As he said himself he had dropped five balls short against Fenagh, that day didn’t go well for him and he knew that but everything went right for him on Sunday,” remarked the manager.

More of the same from Browne, Chis Healy et all is what’s needed on Sunday.

Two Mile House have won five trophies this season thus far. There’s just one more to grab. Two Mile House, All Ireland champions. It has a nice ring to it. So too does Jarlath Gilroy, All Ireland winning manager.

That’s the aim, that’s the dream and no doubt plenty will be praying for the same at that early mass on Sunday morning before the buses pull off and head for GAA Headquarters.