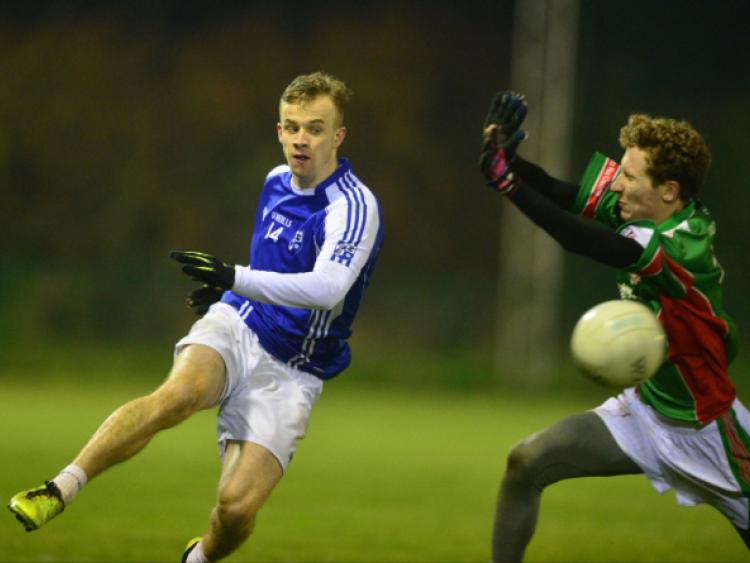 Two early Monasterevin goals help then on their way to a handsome victory over Suncroft in the U21 B final.

Two early Monasterevin goals help then on their way to a handsome victory over Suncroft in the U21 B final.

Opening the scoring after two minutes, Monasterevin couldn’t have hoped for a better start as a Wayne Fitzpatrick free drifter to the right of the post to the waiting Daniel Dee, who squared across the box to Padraig Stapleton. Stapleton had no problem netting to send Monasterevin into a healthy early lead.

Suncroft attempted to steady the ship through a Ciaran Brennan point but Monasterevin were in scoring form. Pouring forward from the lockout Dee had the ball in the net for a second time to shock the Suncroft outfit.

A point from Dylan Connolly proved Suncroft’s reply in the thirteenth minute. With momentum with them Wayne Fitzpatrick opened his days account with a well taken point moments later to maintain the six point difference, points from Darren Harrison and Aaron Bannon Whelan had Suncroft scratching their heads as half time approached.

Two points from Wayne Foy and Dean King had five between the sides before a Fitzpatrick free deep in injury time meant it was to be the goals that would separate the sides at the break.

Suncroft needed to start the second half the better as they worked to get back into contention, and this was exactly what they done with King netting past Larry Foy in the Monasterevin net to put three between the sides.

Sending the danger Monasterevin again felt the need to pour forward in numbers and despite a shot from the boot of Cormac Brady coming off the upright, Monasterevin were relentless in attack. Points from Brady (2), Stapleton and Fitzpatrick had the lead briefly extended to seven, before Wayne Foy pointed for Suncroft to ensure it would again be those two early goals that seperated the sides.

Unable to shake Suncroft since netting their second Monasterevin poured forward with intent.

Points from Brady, Jordan Kevin, Cian Harrison and two for Fitzpatrick were closely followed by a third goal this from the boot of Brady, to ensure Monasterevin would run out emphatic victors over a poor Suncroft side.