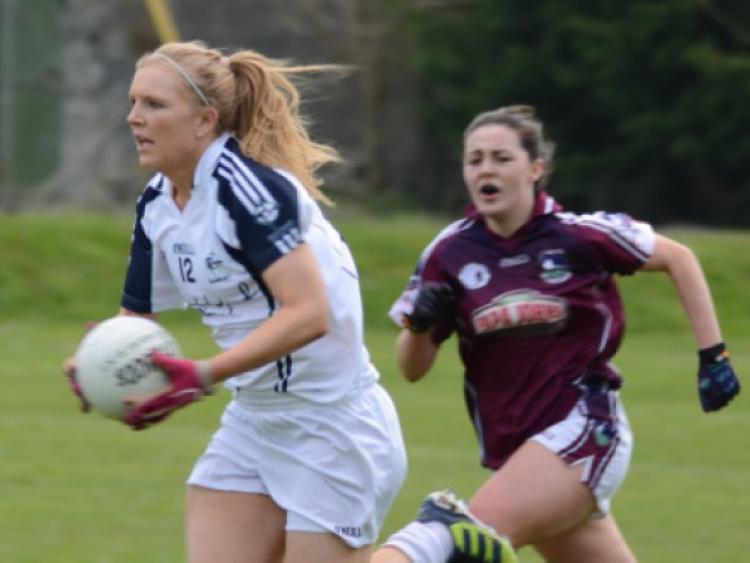 A last minute free from the boot of Edel Concannon cost Kildare a place in the Tesco HomeGrown NFL Division 2 final. After falling to an early seven point deficit it looked as if Galway had this game under control but two goals in sixty seconds from Gillian Behan and Maria Moolick hauled Kildare right back into the fixture kicking and screaming.

A last minute free from the boot of Edel Concannon cost Kildare a place in the Tesco HomeGrown NFL Division 2 final. After falling to an early seven point deficit it looked as if Galway had this game under control but two goals in sixty seconds from Gillian Behan and Maria Moolick hauled Kildare right back into the fixture kicking and screaming.

It was the Tribeswomen who opened the scoring, Roisin Leonard raising the white flag. After the attempt of Deirdre Brennan was thwarted by Kildare’s Brianne Leahy, Brennan was forced into the cross field ball to Leonard who found herself in space. Her shot opened the Galway account.

It took Kildare all of ten minutes to get on the score board, their first coming from the boot of Aine Gately. A Johanna Connolly kick-out fell straight to the Confey woman, who pointed with ease.

Just as Kildare looked to have gotten to grips with this Galway side, Aoibheann Daly had the ball past Hulgraine in the Kildare goals. An overlap allowed Galway to move the ball at pace before Daly grabbed possession, her shot one on one with Hulgraine seeing Galway into the lead yet again.

Brennan and Edel Concannon added more misery on the Kildare outfit as the clock hit twenty adding a further 1-1 to their tally.

With four minutes to play in the first half Maria Moolick forged her way into the Galway danger area, a place Kildare were not too familiar with at this stage of the game. Her cracking shot, striking the base of the uprigh, rebounded to Gillian Behan who was bearing down on the edge of the small square like a steam train. Making it to the rebound before Connolly, she blasted the ball into the back of the Galway net.

Looking rattled by the goal, Connolly’s kick-out went straight to Kildare captain Moolick who shot high past the hapless Connolly to see the sides separated by a single point as half-time loomed on a score-line of 2-1 to 2-2.

Before the sides could relax they traded further points in a bid to shake off each other’s challenge, Lorna Joyce doing the honours for Galway before Roisin Byrne responded for Kildare.

After taking ten minutes to get to grips with Galway in the first half Kildare were out of the blocks quicker come the second, with the two girls responsible for turning the fixture around for Kildare also being responsible for hauling them into the lead. Points from Behan and Moolick put Kildare ahead on a score-line of 2-4 to 2-3.

Four points in four minutes from the tribeswomen’s Daly, Leonard, Lucy Hannon and Concannon had Galway again into a commanding three point lead. Two points from the boot of Stacy Cannon brought Kildare back to within one before Leonard again put day light between the sides.

As the game entered the final ten minutes the tension in the stands reached fever-pitch. Two frees from Kildare’s Aine Gately had levelled matters with only six minutes remaining.

The clock ticked quickly towards sixty and with extra-time looking the likely answer Galway got one final chance to steal victory from this brave Kildare side, winning a free twenty-five yards from goal. Concannon made no mistake, converting the placed ball and booking her side’s place in the Division 2 league final against Kerry who convincingly overcame Westmeath on a score-line of 3-16 to 0-6.