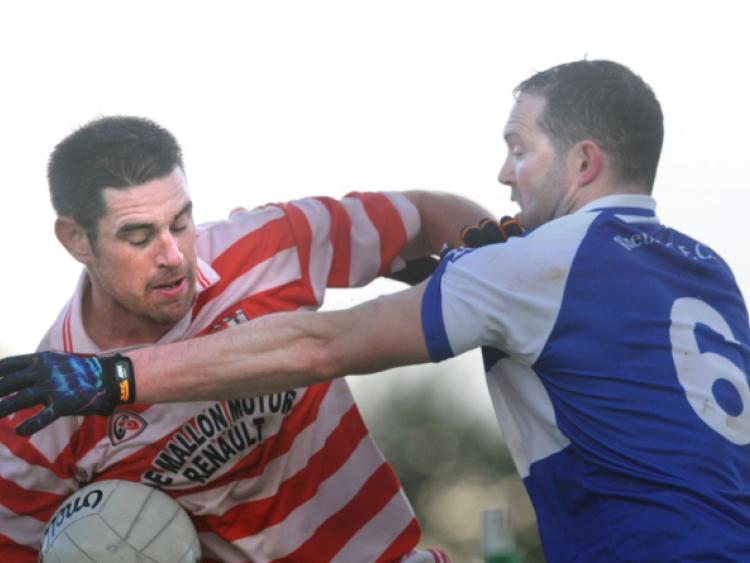 CHAMPIONSHIP semi-final places are within touching distance for a number of intermediate clubs ahead of their return to second round action this weekend.

CHAMPIONSHIP semi-final places are within touching distance for a number of intermediate clubs ahead of their return to second round action this weekend.

To some of those teams, if not all, that opening round of fixtures in early May might seem like an eternity ago, although given some of the beatings that were dished out, some no doubt will be grateful that they could revert their immediate attentions back to the league in order to get over their championship woes.

This weekend’s action begins this Friday evening, when Kilcock meet Ballyteague in Rathcoffey, while Robertstown play Nurney in Sarsfields. Both games will throw in at 7.15pm.

Cormac Davey’s Kilcock have been one of the form teams this year, suffering only one league defeat in 15, yet only missing out on a league final place by a single point.

They comfortably saw off Sallins on Day 1 of the IFC with oceans to sparem but despite a poor enough league campaign, an encouraging two-point championship win over Kilcullen will no doubt offer Ballyteague hope of getting a lot closer to Kilcock – no doubt one of the IFC contenders – than Sallins managed. Ballyteague will, however, need to play above and beyond themselves if they are to prevail against a Kilcock side who will be so well organised.

Meanwhile, Robertstown and Nurney both know that their intermediate status will be under real threat should either of them lose when they meet. Robertstown would, I’m sure, have held outside hopes of mounting a championship tilt before the action got underway three months ago and if that is in fact to come to pass, they are going to have to do it the hard way following their loss to Rathangan (3-10 to 3-7), while Nurney came up three points (0-9 to 0-6) shy of Ellistown. This might be closer than many expect and possibly firey but Sean McLoughlin’s side – even taking into account injuries, retirements and unavailabilities – should have the necessary fire-power to see them over the line.

Kill suffered a 3-5 to 2-5 loss to Caragh in Round 1, while Sallins lost by 18 points against Kilcock; they’ll get closer to Kill than they that but not close enough.

The Caragh and Raheens game meanwhile, is obviously a local derby that will no doubt attract a lot of interest.

Raheens are the form team of the two, and only last weekend remarkably confirmed to Division 1 league football next season following a lengthy absence from the top flight.

Caragh didn’t fare as well in the league – in fact they lost ten of their 15 games – but considering the bragging rights and pride at stake, this game could well take on a life of their own, with Richie Connor’s side coming narrowly out on top.

There might not be as much fanfare or indeed as pretty an affair in Moorefield, when Eadestown and Kilcullen meet at 7.15pm, although the Bolton brothers, Cian and Emmett, should have enough in their respective lockers to see their side over the line and safe from the threat of relegation, with all eyes then once again back on the bigger prize.

Sunday’s action will again be played at three different venues– the pick of the games the meeting of championship contenders Johnstownbridge and Round Towers.

There can be no doubting JTB’s credentials when considering that in their panel they will be able to include Kildare panellists Keith and Paul Cribbin, Daniel Flynn, Sean Hurley, Cathal McNally and Brian Flanagan.

If championships were won on paper then the ‘Bridge would have won the IFC years ago and just like in recent seasons, their biggest threat to returning to the top table is themselves. But, with a solid Division 1 league campaign under their belts, Sean Cawley’s men should have too much for Towers, another likely to be there or thereabouts later in the season.

Elsewhere, Castledermot – another perceived “smaller” club who performed admirably well in Division 1 – will look to continue that form when they meet Clogherinkoe in Ballykelly at 6pm.

The absence from the panel of Ciaran and Brian Graven will no doubt have hit Chris Byrne’s Clogherinkoe panel, with Castledermot – hopeful of capitalising and avenging their 2-12 to 1-6 loss to Johnstownbridge.

Finally, bringing the weekend’s intermediate action to a close, Rathangan will play Ellistown in Hawkfield. This could well be another close affair, but Rathangan’s greater scoring potential likely to see them through what should be a tight affair.