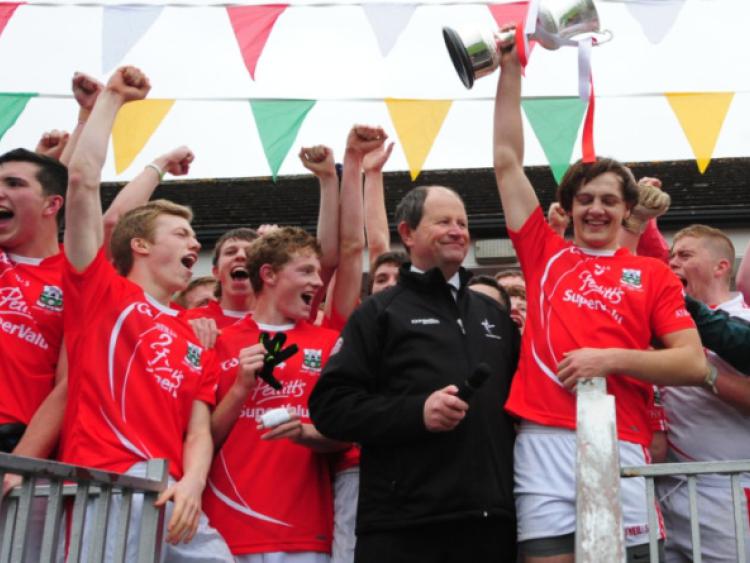 A superb start to the second-half was the key to victory as Athy got hold of their fourth Minor Championship title in six years at the expense of Two Mile House in St Conleth’s Park last Sunday afternoon.

A superb start to the second-half was the key to victory as Athy got hold of their fourth Minor Championship title in six years at the expense of Two Mile House in St Conleth’s Park last Sunday afternoon.

Paschal Connell lifted aloft the Gilligan Cup to rapturous applause from the devoted Athy faithful and despite the efforts of a courageous Two Mile House side, the men in red were worthy winners in what was an exhilarating contest.

There was little to chose between the sides in a close fought first half with Athy going to the break just a point to the good. The key moment came within seconds of the start of the second-half when Barry Kelly found the back of the net and they tacked on three quick points to extend their lead to seven.

To their credit, Two Mile House came fighting back scoring 1-2 without reply with Chris Healy finding the net from the penalty spot. At this stage the game was very much on a knife edge but Athy showed why they have dominated the minor grade in recent years as they eased away with a string of points to seal the victory and add another title to their impressive haul in recent years.

‘The House’ started the game the brighter and almost had the ball in the back of the net just 15 seconds after the throw in but Marc Prior saved Athy’s blushes pushing away Mark Sherry’s goalbound effort. Sherry’s side did go in front after a minute and a half as Chris Julian landed the first of his three frees.

Rory Feely responded for Athy splitting the posts into the dressing room end with a superbly weighted 45’ with four minutes of the game played before Julian, who scored 1-4 in Two Mile House’s semi-final victory over Naas, pointed his second free of the game, followed by a point from the boot of Ian Caffrey.

Substitute Michael Kelly, who came in for the injured Daragh Roycroft after 16 minutes, immediately made a difference and after a hat-trick of Tony Martin points and one from captain Paschal Connell, he got his name on the scoresheet capping off a lovely team move.

Chris Healy, who was arguably Two Mile House’s best player on the day, exchanged three points with Athy’s John Moran and Tony Martin respectively to leave the scoreboard reading 0-8 to 0-7 in favour of Athy at half time.

The second period started at an electrifying pace and Athy had the ball in the back of the net after 23 seconds. Michael Kelly was once again involved as he played in Barry Kelly who made no mistake firing past a hapless Richard Drumgoole-Maguire.

Athy seemed to gain confidence from this passage of play and racked up a further three points in as many minutes through Kevin Maher, Michael Kelly and Tony Martin.

Two Mile House to their credit were holding their own and after two points from Chris Healy they got their just reward as they were awarded a penalty when Paschal Connell hauled down Adam Burke inside the large square and Chris Healy dispatched the resulting spot-kick with great aplomb.

Sparked into life somewhat by this, Athy’s experience came through as they once again stepped it up a gear just as they did in the first half to pull away from their opponents with a number of outstanding points. The pick of the bunch no doubt coming from the peg of Rory Feely.

Both sides ended the game with 14 men as they each had a man sent off for two bookable offences, but it was Athy who finished up with silverware and deservedly so.