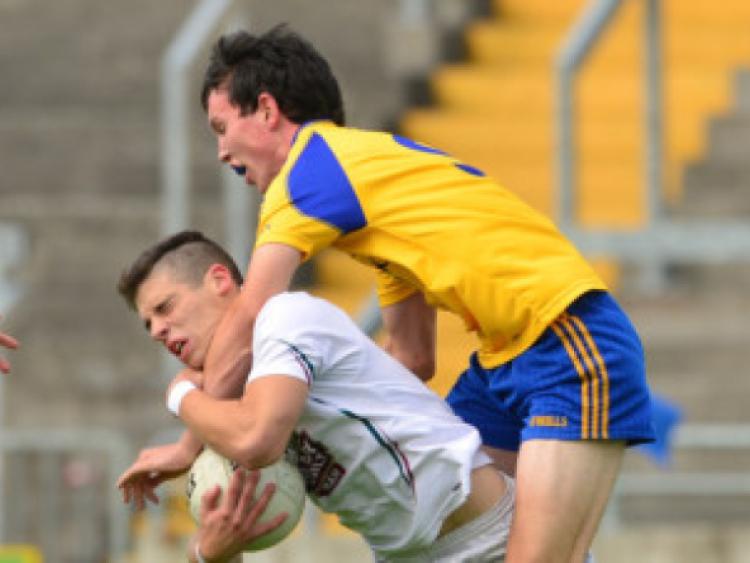 THE weight of being labelled favourites by many proved too heavy a load to carry for Kildare’s minor footballers as they crashed out of the All Ireland race (3-8 to 0-12) in Tullamore on Monday afternoon last.

THE weight of being labelled favourites by many proved too heavy a load to carry for Kildare’s minor footballers as they crashed out of the All Ireland race (3-8 to 0-12) in Tullamore on Monday afternoon last.

What was supposed to be a straight-forward win for a Kildare side who only weeks previous had won for the county a first Leinster title in 21 years, transpired to be anything but that.

Three first half goals for 4/1 outsiders Roscommon set the beaten Connaught finalists on their way, that despite playing with 14-men following the 27th minute sending off of midfielder, Tadgh O’Rourke for a second bookable offence.

By that juncture the underdogs were already six points clear, that after Ultan Harney, star man Diarmuid Murtagh and Diarmuid McCann had all found the net to shock the beleaguered Lilywhites.

A nervous-looking Kildare were in trouble from the get-go and never quite recovered from conceding a goal inside the opening minute when Ultan Hanley slipped a low finish past a flat-footed, Sean Dempsey at his near post.

Indeed, matters grew considerably worse for the Lilywhites before they showed any signs of getting better, for after Jack Earley and Henry Walsh added points, the Rossies plundered a second goal after just ten minutes, the brilliant Murtagh showing incredible strength to hold off Cian McConnell before sliding a nice finish wide of Dempsey and into the net.

Two minutes later Neil Flynn opened Kildare’s account with a pointed free, before Chris Healy added a brace after 18 and 20 minutes respectively to cut the arrears to five points (2-2 to 0-3).

But still, Roscommon, despite playing against the breeze, continued to dominate and dictate the pace of the game. Finding it very easy to penetrate Kildare, Roscommon’s third goal arrived nine minutes before the interval, Diarmuid McGann flicking home at the back post after Walsh unselfishly squared for the Strokestown clubman following a darting run.

Wayne Fitzpatrick, subdued for long spells like so many of his fellow Kildare forwards, pulled back a point, as did Cein McMonagle by the 26th minute, before their hopes received a timely boost when O’Rourke, booked earlier in the game, was sent to the line after picking up a second caution following a clumsy tackle on Niall Fleming.

Kildare though, failed to utilise their numerical advantage and by half-time they were 3-2 to 0-6 in arrears.

Surprisingly Kildare didn’t make any substitutions during the break despite the alarming trouble they clearly in and upon the restart Harney, who moved to midfield to cover O’Rourke’s loss, lofted over the bar before McGann followed suit to make it a seven point game.

To their credit Kildare kept soldiering on even though they were obviously playing second fiddle to a well-organised Roscommon team who were superb at the back as well as most other areas of the park.

Throwing caution to the wind as they chased the game, Kildare though couldn’t make any sufficient inroads, trailing by five and six points on a number of occasions, the former the difference when the long whistle sounded.