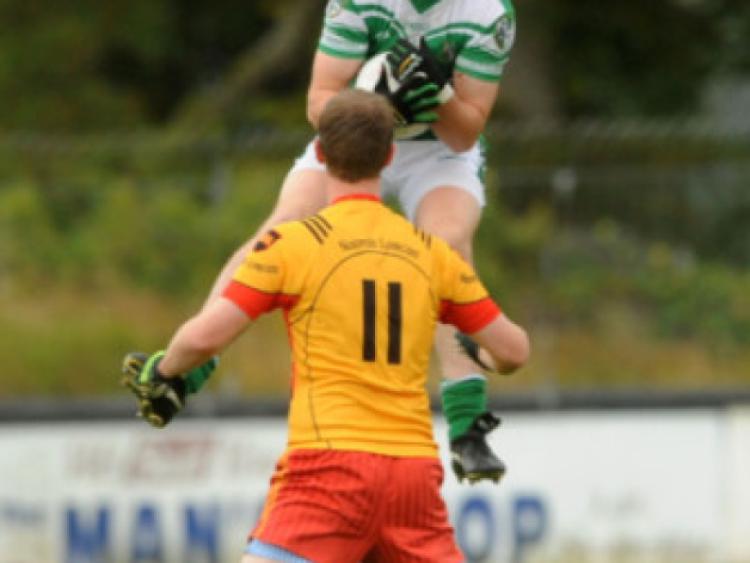 Playing in his first senior league Division 1 game, Kerry native Eanna O’Connor showed just how much of a fine addition he will be to county champions, Moorefield, when he amassed 2-4 againt a Towers side that had simply no answer to this power packed display from the Newbridge boys.

Playing in his first senior league Division 1 game, Kerry native Eanna O’Connor showed just how much of a fine addition he will be to county champions, Moorefield, when he amassed 2-4 againt a Towers side that had simply no answer to this power packed display from the Newbridge boys.

It has to be taken into consideration of course that, on the night, Moorefield were far too good for Round Towers. Luke Dempsey’s team tore into Towers from the very early stages and there was little in the way of a response from the home side.

Moorefield had 1-3 on the scoreboard by the seventh minute with Waterford selector Ronan Sweeney hitting the back of the net.

Stuart Murphy and Jason O’Brien pointed in response for Towers but Moorefield were well into their grove by now and O’Connor showed a fine burst of pace in the 14th minute before scoring his second point of the game. By the time Moorefield scored two goals in a minute just after the midway point of the half the game was as good as over.

O’Connor was the provider for the first when he picked out Ciaran Kelly charging through the centre and he found the bottom corner with a well placed low shot.

Towers had barely drawn breath from that setback when they were picking the ball out of the net again. This time it was O’Connor’s turn and his first goal in Kildare league football was definitely one to remember, a quite stunning shot into the top corner that left Robinson clasping at air.

O’Connor showed he has the heart to fight for a ball too just before his second goal in the 25th minute when he rose above MacDara De Paor to win Kelly’s high pass and when he landed he tucked the ball into the net with consummate ease.

Another plus on the night for Moorefield, and indeed Kildare manager Jason Ryan, was that Daryl Flynn got 60 minutes and while it would be incorrect to say that he looked back to his very best, he will definitely benefit from the run out as he bids to get back to full fitness.

It didn’t get much better for Towers after the break and Moorefield only had to wait ten minutes for their fifth goal. Ronan Sweeney looked totally at ease as he bore down on Robinson and while there are some forwards who aren’t comfortable in a one on one situation, Sweeney isn’t one of them and he proved that once again by cooly slotting past Robinson.

Moorefield completed the rout with five minutes to go when Adam Tyrrell ensured a debate over whether his goal or O’Connor’s first was better with a similarly powerful effort to the top corner.