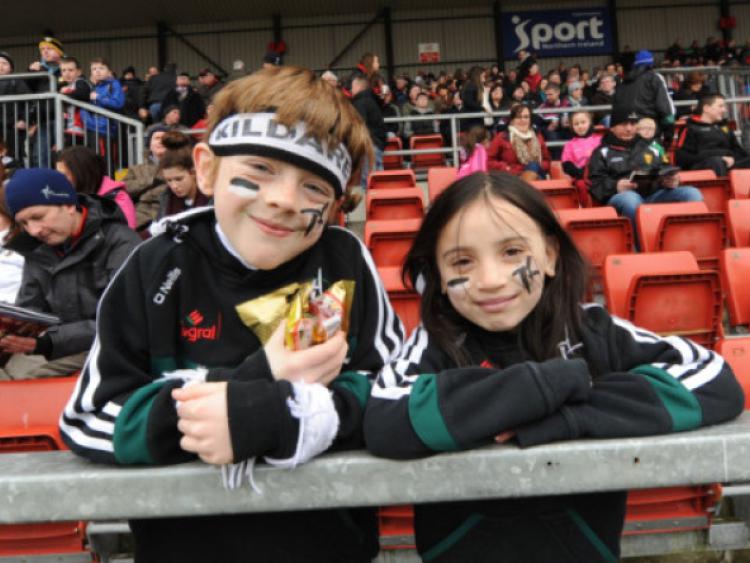 “SO what kind of a rating are you going to give to ‘Maggie’?” asked an avid Kildare follower as we exited Páirc Esler on Sunday.

“SO what kind of a rating are you going to give to ‘Maggie’?” asked an avid Kildare follower as we exited Páirc Esler on Sunday.

For those not in Newry, our friend was referring to one of Sunday’s linesmen, or should that be lineswomen, or possibly linesperson, I’m not sure (maybe a motion at the next congress will decide the correct title) but one way or another one Maggie Farrell from Cavan was the first female to take up an officiating position, to my recollection anyway, at an AFL game involving Kildare.

I’m telling you now boys, the women are slowly but surely taking over.

What with the brilliant Katie Walsh riding the favourite in last Saturday’s Aintree Grand National where she was well in contention with a little over a furlong to go before running out of steam (that was Seabass running out of steam now not Katie); Julie Davis, the Kildare GAA strength and conditioning coach (rightly regarded as one of the best in the business) and now a lady running the line at a top GAA game, and doing a very efficient job at that.

Who would have believed it!

Where will it end I ask myself?

Female refereeing an All Ireland final?

A lady refereeing couldn’t be any worse ... no don’t go down that line.

But it’s all changing boys.

Remember where you heard it first.

So apart from the Cavan woman and how she performed, what about The Lilies.

Well, one thing is for sure we certainly know now (from a Kildare point of view anyway) what is meant by a ‘dead rubber’ game.

The big worry of course is that it was a ‘dead rubber’ for both sides but Down certainly showed that they are more into the dead rubbers than the Kildare lads.

Hopefully The Lilies were thinking ahead; looking forward to this Sunday and a semi final spot, now confirmed against Mickey Harte’s Tyrone (Croke Park 2 pm).

As for the game itself, those of us who believed that Jim McGuinness was the torch bearer for getting men behind the ball can have another think so they can.

What we witnessed on Sunday from Down would put the Donegal tactic to shame. At one stage there were fifteen Down men not alone behind the ball but actually within 40m of their own goal. Incredible or what.

And how did Kildare fare against this tactic?

Down defended, and defended, before breaking in numbers and pouring forward at pace, time and time again kicking long balls over the top or alternatively running through the middle finding more holes in the heart of the Kildare defence than many of the horses discovered in the fences on the second circuit at Aintree on Saturday.

Down hit three goals; it could have been six but for some excellent work by keeper Shane Connolly, and some dreadful finishing by the home side.

Kieran McGeeney certainly was in experimental mode with Sunday’s tactics. Pádraig O’Neill played at no. 6 (some say the last time he played in that position was in the Féile) while All Star corner back, Peter Kelly operated at wing forward.

At least the Two Mile House man knows what it’s like to score as he was one of the top scorers for his club last year (while operating at full back).

Neither of these experiments could be deemed a success; add in the fact that Daryl Flynn was having his first start in nearly two years; Willie Groome was tasting football at this level for the first time; Seanie Johnston (Kildare’s top scorer coming into this game) left his shooting boots back home, or maybe the fact that a Cavan woman was keeping a close eye on him from the edge of the chalked line had an adverse effect on him. And with no Tomás O’Connor as a target man the options were limited before a ball was even kicked in anger.

On the plus side getting some game time into Flynner was a bonus as it was for Eamonn Callaghan. Paul Cribbin looked very comfortable, Seán Hurley did ok after a big week; Johnny Doyle looked eager and back to full fitness while Shane Connolly did remarkably well trying to stop the tide single handedly at times.

Sunday will tell us a lot more but concentration levels will have to improve; passing must come up a few notches; spilling possession will have to cease while the wide count will have to be cut drastically.

One suspects the team selected will be somewhat more balanced; particularly at the back and despite the U21 semi the following week there can be little point in wrapping lads up in cotton wool.

If these lads are going to make it let them begin on Sunday on the big stage in the semi final of the second biggest competition on the GAA calendar!

• Going back to Wednesday last, what a great occasion and what a great advertisement for Gaelic football as this U21 competition has been for many years now.

With the Liam O’Neill, President of the GAA and Martin Skelly, Chairman of Leinster Council in attendance, it must have given both great satisfaction to see a game played at such pace; so much unbridled talent on show and all played in such an exemplinary sporting manner.

Just one yellow card on the night which is always heart warming to see but having said that if the infamous ‘black card’ system which will be hitting the scene come January of 2014 had been in vogue on Wednesday night last, would it have made an appearance?

Despite a game played in as sporting and as enjoyable manner as you would care to be at, I would suggest that a minimum of three and possibly as many as five ‘black cards’ would have been shown, thus sidelining that amount of players.

That, I’m afraid, is the down side of the ‘black card’ system, albeit being brought in in good faith and with the right intentions but in many people’s opinion it is a kin to using a sledge hammer to break the proverbial nut.

• On a lighter note it was good to see the ‘Parnell Three’ reunited at O’Moore Park last week even if it was in ‘enemy territory’.

Many will recall a slight ‘distraction’ away from the play when Kildare dismissed Laois in the U21 semi final a few weeks back.

Well the ‘Parnell Three’ were in situ shouting for their favourites once again on Wednesday.

‘The Life Saver’, ‘The Trained Killer’ and the ‘Supporter in Exile’ were once again in full voice.

Thankfully there was no sighting of, shall we say, former acquaintances!