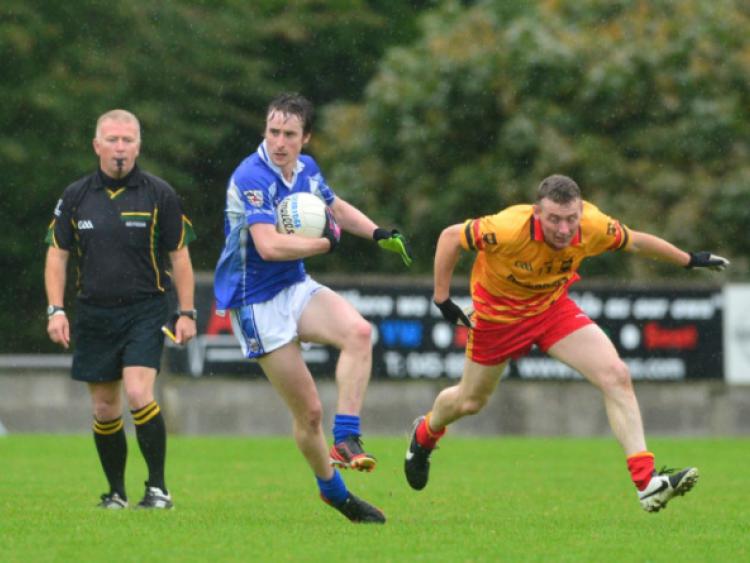 IF St Laurence’s felt that their season couldn’t get any worse then they will surely be this week thinking again following this championship loss to Celbridge at a wet and dull Naas last Sunday evening.

IF St Laurence’s felt that their season couldn’t get any worse then they will surely be this week thinking again following this championship loss to Celbridge at a wet and dull Naas last Sunday evening.

Having suffered relegation from Division 1 of the league, Laurence’s woes were compounded when they were drawn against an in-form Celbridge side whose form, in complete contrast, had recently culminated in a Leader Cup triumph.

Yet, for most of the opening 45 minutes, St Laurence’s were marginally the better side in what was largely a forgettable affair and entering the final quarter, following a quick-fire 1-1 from county man Padraig Fogarty, they clutched a four point lead.

However, rather than continuing to do exactly what had got them into that winning position, the side from Narraghmore sat back, considerably more than they had done previously up to that juncture, and invited Celbridge on to them.

And with a collection of county men only willing to improve on what was at best an ordinary performance up to then, Celbridge duly rose to the challenge, with six unanswered points between the 46th and 57th minutes putting them beyond the Larries’ reach.

Paddy Brophy was Celbridge’s scorer-in-chief, particularly during that late prosperous spell which, of those half a dozen points he scored three, but the league champions won’t be taking too many positives from this other than the fact that they won playing poorly.

The tricky conditions didn’t make things easy on either side but still, for most, Laurence’s were the better of the two sides. They dominated long spells of the possession, even if most of their passing was largely square and not penetrative. Still, they did create plenty of chances but their return of just three scores from 11 shots in the entire first half is self-explanatory.

Fogarty got two of those to give his side a lead after 13 minutes, before Shane Harte finally opened up Celbridge’s account four minutes later. Although they worked tirelessly in putting pressure on Celbridge, they ultimately robbed Peter to pay Paul and couldn’t contribute enough going the other way, with 18 further minutes passing before they made another attack on the scoreboard.

By the break, as Celbridge slowly began to get into the game, they had established a 0-4 to 0-3 advantage following further points from Brophy (2) and David Byrne.

The second half followed a similar pattern, with Laurence’s making the early running and they were rewarded by a brace of points from Fogarty either side of a 44th minute goal from the same player, who rifled home to punish a terrible defensive mistake.

That lead should have been enough for Laurence’s but with Celbridge’s return of six scores from ten second half attempts, there was only going to be one winner once Laurence’s retreated on to the back foot, with Harte, Conor Brophy (free) and Ollie Lyons complementing Paddy Brophy’s trio of white flags that got the job done.