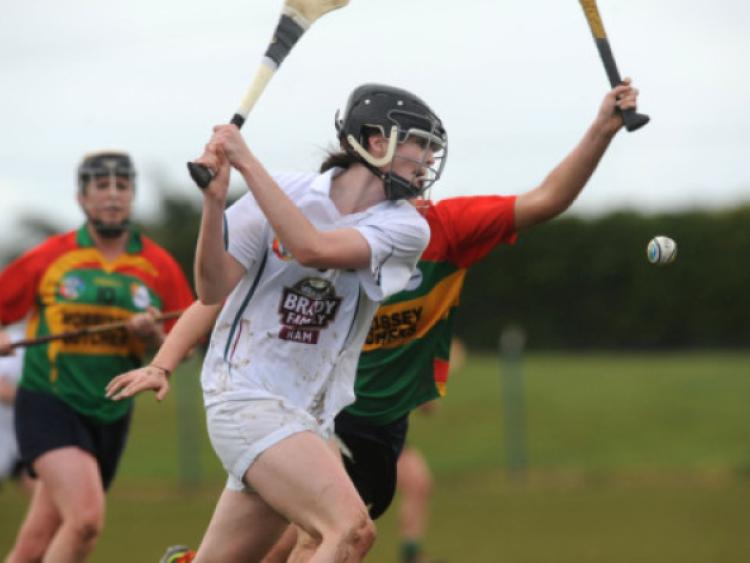 On a wet day in Mountmellick the Kildare Senior ‘B’ team saw their league campaign come to a disappointing end as they failed to register a single point against the local rivals Carlow.

On a wet day in Mountmellick the Kildare Senior ‘B’ team saw their league campaign come to a disappointing end as they failed to register a single point against the local rivals Carlow.

The onslaught began in the seventh minute with a goal from the stick of Eleanor Treacy, the shot injuring Kildare keeper Tanya Johnson in the build-up. Luckily for Kildare Johnson was able to continue as they attempted to get their game fired up.

This was not the case as 2 points from Alison Ruschitzo had Carlow five points clear with only nine minutes on the clock.

Kildare gave their defence a momentary break following this early rout by Carlow as they pushed forward. Winning a free on the 45 meter line Kildare looked to register their first score of the day.

Emer Reilly was the player to step up to spot to attempt the strike. Reilly rose the sliotar and struck in the direction of the Carlow goals, only to see her shot falling short and onto the stick of Carlow keeper Johanna Joyce.

Following this rare venture forward for Kildare, Carlow pushed on yet again, hitting points from Treacy in the seventeenth minute before Susan Williams, Tara Wilson and Ciara Mullins had each rose the white flag to see Carlow extend their lead to nine points with 6 minutes remaining on the first half clock.

Kildare made one final attempt in the first half to open their account for the day.

Working the sliotar out from defence the attempted pass into the full forward was cut out by the rising hand of Emma Brennan who claimed a great catch to cut out any further hopes of Kildare registering a score before the half time break.

The side were seperated by nine points at half time on a score-line of 0-0 to 1-6.

With the rain coming down in showers and the pitch starting to hold the water Kildare were looking for the clouds to break on their second half performance.

The second half got to life a lot quicker than the first with the waiting spectators only having to wait two minutes for the opening score. It being a goal from the stick of Kate Nolan further extending the Carlow lead to 0-0 to 2-6.

A fine point off the right side line, fourteen yards from goals seen Ruschitzo heap further misery on the Kildare side.

It was not the start that Kildare were hoping for as they were at twos and fours in a bid to cope with the Carlow attack.

Seconds after Ruschitzo’s third point Carlow were unlucky not to have netted their third goal of the day as Ciara Quirke rounded the back of the Kildare defence only to bat wide of the goals.

A Brennan point, set the stage for Quirke to rectify her earlier wide. A scrap eighteen yards from goal, Quirke spotted the ball stormed into the mix, her strike connecting cleanly with the sliotar, she watched as her shot flew low past Kildare shot stopper Johnson.

Trailing as the game entered its final five minutes Kildare lost the bite to attack and Carlow sensed this as they continued to heap despair on the Kildare defence.

With three late points from Mullins, Williams and Treacy Carlow rounded off their days scoring subjecting Kildare to a disappointing 0-0 to 3-11 defeat