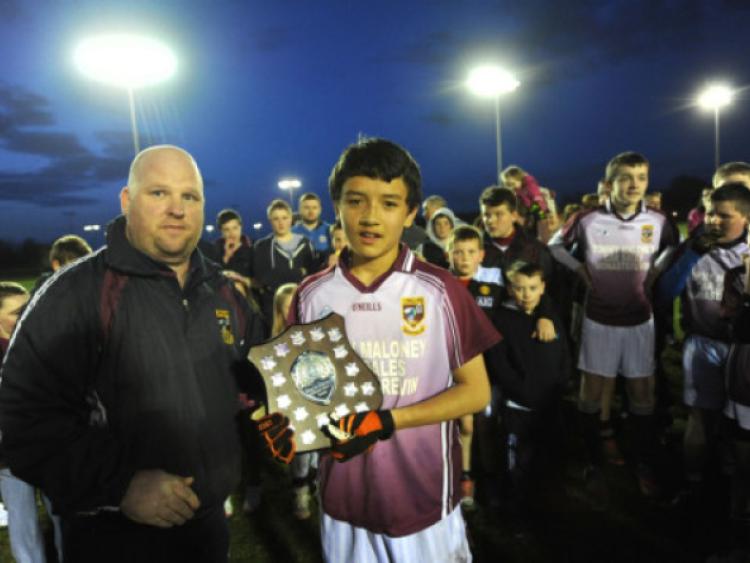 Ballykelly dominating the early exchanges on this Feile C Shield final on Friday night, played in Hawkfield but not getting reward for their scores.

Calvin Dunne struck first for Ballykelly in this Feile C Shield final on Friday night, played in Hawkfield, a neat finish for a goal and Cian Stafford added a point soon after.

St Kevins began to settle late onand points from Gary Kelly (2) and Ciaran Smith brought them close. Ballykelly goalkeeper Paddy Nichols was called into action twice in a matter of moments as he somehow kept out firstly a goal bound shot from St Kevin’s Daithi Marron from just under the crossbar and just after the same player took a shot that took a slight deflection and Paddy got his legs to it. Referee John Knight blew the whistle for half time with the minimum between the sides. Ballykelly 1-1 St Kevins 0-3

The second half began brightly for St Kevins with a goal from corner forward Liam Aspel. Ballykelly’s Daniel Allen converted a point. Midfielder James Ebbs was dominating around the middle third and a neat pass from Cian Stafford sent him racing through and he unleashed an unstoppable shot to find the net. A further point from corner forward Cillian Ures put Ballykelly 3 points ahead again.

Ballykelly keeper Paddy Nichols was called into action with a superb stop from under his crossbar.

Ballykelly dug deep and in a three minute spell it was Lawler that firstly burst through the middle unleashing a thunderous shot to the roof of the net. The ball was kicked out and James Ebbs collected it in midfield, fed in Lawler again with him taking a point with the coolest of finishes.

Ballykelly suddenly found themselves 4 points ahead with time almost up. St Kevin’s responded and could count themselves a little unlucky as they failed to convert a couple of chances as time ticked down. The final whistle blew shortly after to rapturous scenes from the players, mentors and supporters. Both sides can be proud of their display and will surely meet in plenty of finals in the coming years.