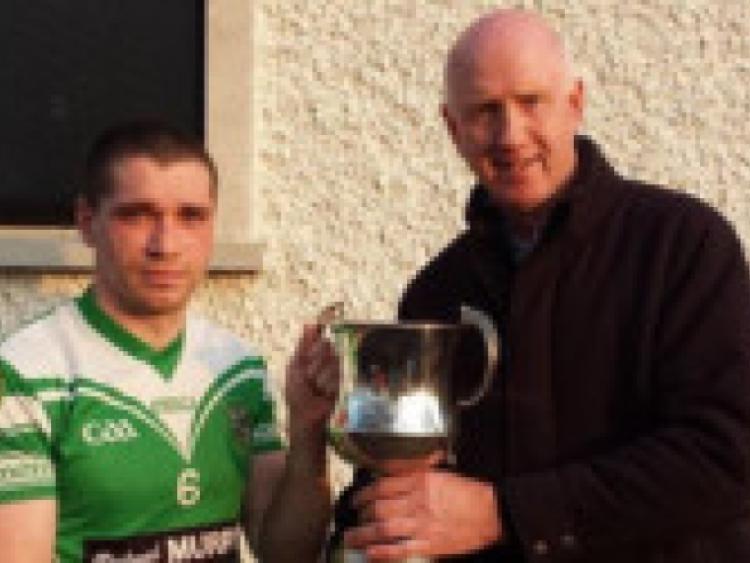 Moorefield bounced back in style from their defeat to Carbury in the senior football league last week with a comfortable victory to win the 39th Herbert Cup played in excellent conditions in Ballyteague on Easter Monday, on a score line of Moorefield 3-19 Carbury 2-6.

Moorefield bounced back in style from their defeat to Carbury in the senior football league last week with a comfortable victory to win the 39th Herbert Cup played in excellent conditions in Ballyteague on Easter Monday, on a score line of Moorefield 3-19 Carbury 2-6.

Carbury were first to raise the white flag when Willie Groome won possession from the throw in and sent in a great ball to Pat Grace who pointed from play.

The Moores replied instantly with two good points from full forward Ciarán Kelly to put them in the lead for the first time, after five minutes.

Niall Hurley-Lynch kicked the Moore’s third in the 9th minute with a good point from play, a move that started with Ger Naughton at full back who combined with James Murray who sent in a great ball to Hurley-Lynch to set him up for the score.

Carbury were back in the lead five minutes later after they were awarded a penalty which Terry Rossiter successfully converted.

Ciarán Kelly, who was having a great game at full forward, kicked his third point from play to level the game in the 17th minute after being set up by Cian O’Connor.

Niall Hurley-Lynch sent the Moore’s into half time with a comfortable lead when he beat Declan Conroy for the Moore’s first goal after a great ball from Ross Glavin to leave a half time score reading Moorefield 1-8 to 1-2.

Adam Tyrrell opened the scoring in the second half with a fine individual point from play followed by a good point from Hurley-Lynch.

Carbury replied with a point from Willie Groome and a second penalty from Terry Rossiter to leave four separating the teams.

Moorefield upped a gear or two after the spot kick and dominated the game for the next fifteen minutes playing some excellent football that was a joy for spectators to watch.

Aaron Mullins added a point from play in the 6th minute before in-form Adam Tyrrell hit a screamer of a goal after good work from Ian Lonergan and Cian O’Connor.

Carbury refused to give up and added points from Willie Groome (2) and James Kelly but the Moore’s were in flying form and had their scoring boots on with points coming from Ciarán Kelly (3), Cian O’Connor, Keith Duane and Adam Tyrrell to leave a final score reading Moorefield 3-19 Carbury 2-6.