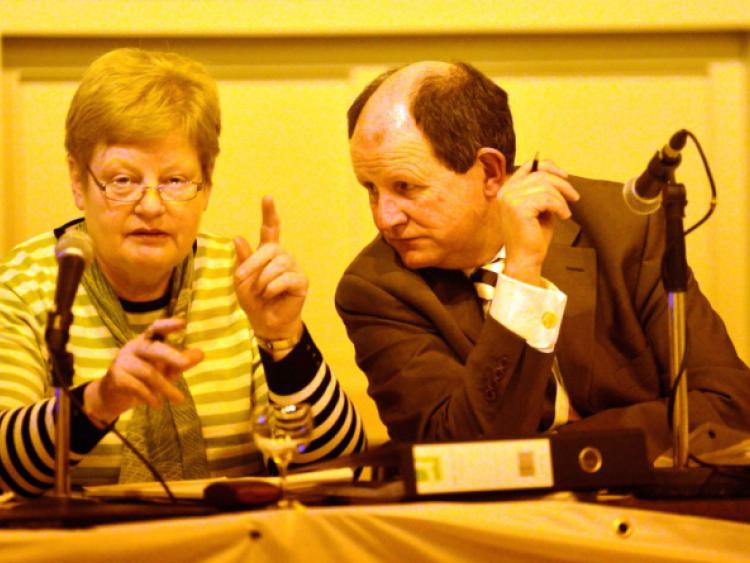 “Another step in the recovery of our independence”. No not the words of our esteemed Taoiseach Enda Kenny or indeed his ‘vice captain’ Mr. Gilmore at the Labour Party annual shin-dig down in Kerry over the weekend.

“Another step in the recovery of our independence”. No not the words of our esteemed Taoiseach Enda Kenny or indeed his ‘vice captain’ Mr. Gilmore at the Labour Party annual shin-dig down in Kerry over the weekend.

In fact the words were spoken at the annual Kildare GAA Convention in the splendid new Moorefield GAA headquarters on Saturday evening when the grass roots of the county met for their annual review of the year.

None other than John  McMahon, Chairman of Kildare GAA County Board, who was re-elected unopposed for another twelve months of office.

It has been a difficult and no doubt stressful twelve months for Mr. McMahon, what with finances requiring that infamous bailout and the shoddy way in which Kieran McGeeney was told, thanks but no thanks, after six years.

Yes, indeed it has been a  period when Kildare found itself making national headlines, mostly it has to be said, for all the wrong reasons.

Jason Ryan has replaced McGeeney and it has to be said, without a ball being kicked in anger, already it would seem is making a very favourable impression but no doubt, the Waterford native is more than aware of the fickleness of supporters, not to mention club delegates if they feel they are not getting a fair crack of the whip.

On the financial front, things are certainly moving in the right direction after considerable time and effort over the past 12 months or so.

A lot of change has been introduced. Overheads have been cut drastically; expenditure has been severely curtailed; the work of the  supervisory finance committee has done Trojan work in helping to get things back on track and on Saturday evening last Treasurer, Martin Whyte, announced that the day-to-day running of the Co. Board is firmly under control, showing a surplus of no less than €177,836 as distinct from a figure, a mere twelve months ago, of €3,861.

Impressive or what? Absolutely. But of course, and yes I know there always has to be a but, as usual the devil is the detail.

There were some very exceptional items that helped to make up that healthy surplus. Items such as four sell-out games at St Conleth’s Park; items such as forfeiting a home venue against Dublin (worth a healthy five figure sum); items such as operating in the Division 1 of the Allianz NFL and reaching the semi final which was worth over €140,000 (an increase of nearly €90,000).

On the downside(?) there will be no forfeiting of a home game this year while how Kildare perform in the league will be watched very carefully, not only by supporters but by those counting the coppers.

Of course 2014 will be the year the full twelve month repayment monies on the bailout will be handed over and the fact that the agreed extra fund-raising sum of €100,000 in 2013 came in 80 per cent short of target will also have to be made up.

Like all balance sheets one can read them the way one wants to read them but Francis O’Connell, chairman of the FSC, certainly took the wind out of the sails when he said Kildare needed to raise some €200,000 in 2014 in order to keep everything in order.

It was a figure that seemed to go over the heads of delegates, with little or no concern, debate or discussion.

In fairness Suncroft’s Shane Kavanagh informed the gathering that that figure was the equivalent of every club in the county handing over some €7,000 to the county board.

Again a remark that was left hanging in the air as another train whizzed by the convention centre.

The one big worrying aspect of the entire evening was undoubtedly the lack of a plan. The lack of any major fund-raising initiative. The lack of any blue print that would see Kildare make inroads into its financial debt, even allowing for the exceptional performance of the day-to-day running of the organisation.

Club Kildare’s accounts were also included in the financial report for the first time, following the Croke Park directive that all monies must come under the control of the Co. Board.

Club Kildare performed exceptionally well again with an income of just over €100,000 with over €90,000 of that going to ‘Co. Board and Team Subvention’.

However relations between Club Kildare and the Co. Board would seem to be very fragile at the minute and with no one present to answer queries on the accounts little improvement in relations is imminent it would seem while the fact that Club Kildare has called an EGM for 10 December (Keadeen, 7.30) looks  ominous to say the least.

Let’s hope that what- ever differences are causing fraught relations they can be ironed out for the betterment of Kildare GAA.

Personal grievances and differences should be set aside; mud slinging will not benefit anyone,  anybody or indeed Kildare GAA as a whole.

Delegates were informed that a total of 1,315 adult games were played in 2013, a phenomenal amount by any standards and much credit for that much go to head of fixtures Ger Donnelly and his committee. Ger did appeal to clubs on the issue of games being postponed pointing to the fact that 36 per cent of fixed games had to be changed due to various and varied reasons, causing a lot of problems and extreme difficulty especially for referees boss Mick Fennin.

Ardclough’s motion on transfers received the full backing of convention ensuring that at last guidelines are in place in this regard.

Recommendations regarding player availability for their clubs will be discussed (as usual) prior to the commencement of the leagues which seemed to please Eadestown delegate Pat Doyle immensely.

Meanwhile Secretary Kathleen O’Neill, who was in the news earlier this week concerning her comments on Dublin’s major sponsorship deal clarified her position saying that her comments were directed more at Croke Park than at Dublin.

Her remarks had Clane delegate, Frank Duffy, practically doing handstands in total agreement with her sentiments.

A passionate Frank, who knows his GAA better than most, said he was thrilled and delighted that at least a debate was opening up over the so called big counties versus the rest.

No doubt Kathleen will have an extra card on her  mantlepiece this Christmas.

You never know Frank might even drop over a  bouquet of flowers such was his enthusiasm for the secretary’s comments on a topic dear to the Clane man’s heart.