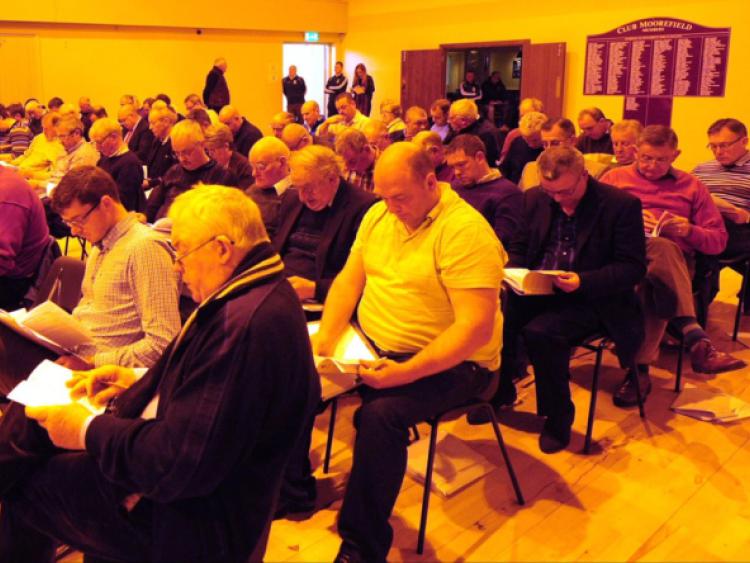 The haemorrhaging has stopped according to County Board chairman John McMahon but the proverbial belt must remain tight for the year ahead and beyond.

The haemorrhaging has stopped according to County Board chairman John McMahon but the proverbial belt must remain tight for the year ahead and beyond.

The Naas man, who was unopposed for the position of chairman for 2014, addressed the annual Convention at Hawkfield last Saturday evening and not surprisingly, it was finance which dominated his agenda.

He paid tribute to treasurer Martin White for his tireless work over the course of the last 12 months, and also complimented the newly-established finance committee for steadying the ship, but warned that things must remain tight going forward.

“Probably the most important and pressing issue facing us as a county continues to be related to finance. Under this heading I’m including or central fund debt, our Hawkfield mortgage, fundraising, budgets and expenditure. Our accounts have been presented and discussed, and they show continuous improvement. The haemorrhage has stopped, however, we still have a momentous task ahead of us,” insisted McMahon.

The Naas man added: “As noted in my address last year, I put several measures in place to oversee and monitor the day-to-day spending and to check all items related to finance.

“A major element of this was our finance committee, who worked exceptionally well and hard throughout the year. As part of this process, we agreed budgets with all county team managers and to their credit and with the cooperation of all the players, all budgets were adhered to.

“We were in receipt of some one off, exceptional items this year, which will not be available in 2014. This will add to the difficult task of raising money.

“I am very conscious of the difficult times that clubs and supporters are facing, but we must all continue to work together on this major and difficult task.”

The levy imposed on clubs for the repayment of loans for the completion of Hawkfield remain a huge burden on all clubs and McMahon thanked clubs for their co-operation on the matter.

He said he realised how difficult it was for clubs to pay the levy, but reminded them that they were paying for a facility that they should be extremely proud of.

“Our centre of excellence is the envy of most counties. Some of our nearest competitors have nothing to compare with it.

“Over a typical week, Hawkfield caters for over 700 players, including all codes and ages ranging from senior football down to development squads. During the school year it also hosts numerous schools and colleges matches. It caters for Bord na nOg finals in both hurling and football as well as a number of our club championship matches. The building is now a central gathering point, and also takes various meetings throughout the year, so it gives great value and return. There is a mortgage, a relatively small one for what is in place for the future of Kildare GAA,” explained the chairman.

Another pressing issue that arose in 2013 was the state of Kildare’s county grounds, St Conleth’s Park in Newbridge.

Following the Slattery Report, the ground had its capacity cut and in order to have that reversed, major improvements were needed and some of these were carried out throughout the year.

The chairman thanked all involved in the works, and explained what was remaining to be completed in the coming months.

“The health and safety issues arising from the Slattery Report also had a big role to play this year. We faced up to the challenged and established a development committee, who all worked very hard and identified the tasks and put in place a financial package to enable works to be carried out at St Conleth’s Park.

“Our target date for completion of phase one of these works was the Senior Football Championship final weekend, and we successfully completed these works to the terrace, toilets and some other minor works.

“Phase two of the works will start in early 2014, and will include a central sales office and improvement to the referee’s facilities. We also must look forward to major works to the stand.

“While our finances are very restrictive, nonetheless we have to press ahead and plan for the future,” remarked Mr McMahon.

The Naas man was responsible this year in finding a new Kildare senior football manager and the man he settle on was Waterford native Jason Ryan, whom he wished well for the year ahead.

Ryan replaced Kieran McGeeney in the hotseat, and the chairman paid tribute to the Armagh man for all his endeavours during his five-year tenure.

“The replacement of our senior football manager was of great interest locally and nationally. Kieran McGeeney was very successful in developing the Kildare brand and I thank him and his management team for their work.

“Looking forward, I know Jason Ryan is equally focused and determined and I would like to wish him every success,” he added.

Of course, Kildare GAA began 2013 without a sponsor after Tegral withdrew their long association.

Early in the year, Brady Family Ham were unveiled as the new main sponsor, and McMahon said he was indebted to the local company for their support.

“This year, we were very fortunate to bring on board Brady Family Ham as the main sponsor of Kildare GAA. Brady’s, through their managing director Bill O’Brien, are very supportive and interested in a joint approach to promoting our brands and profiles,” said McMahon.

All in all the chairman’s address was a safe one, controversy free, as expected even.

The purse strings are still far from loose, there’s work to be done – and hopefully, trophies to be won.