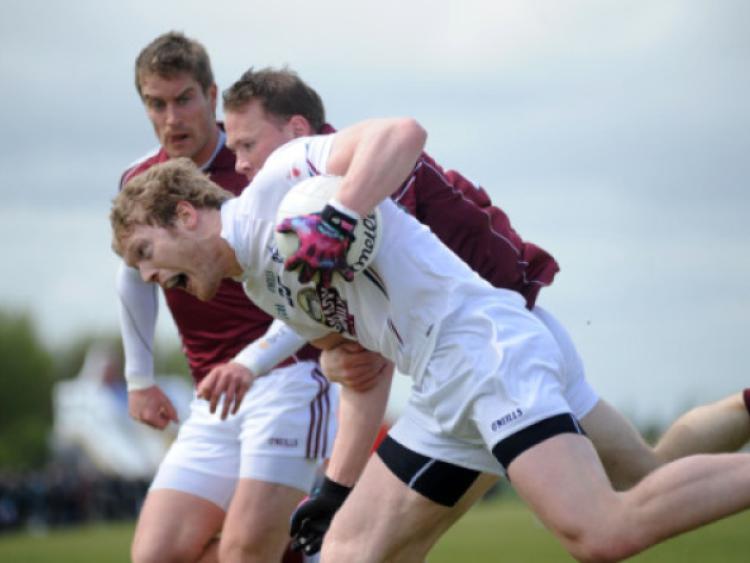 LOTS of positives, in as much as one can take positives from such games, but certainly Kildare and Kieran McGeeney can be well satisfied with this five point win over Galway on Sunday last played at Moorefield grounds to mark the official opening of the club’s magnificent new facilities.

LOTS of positives, in as much as one can take positives from such games, but certainly Kildare and Kieran McGeeney can be well satisfied with this five point win over Galway on Sunday last played at Moorefield grounds to mark the official opening of the club’s magnificent new facilities.

A decent 35 minutes of play from Daryl Flynn was certainly on the positive list while scoring 18 points in total, from nine different players, will do the confidence no harm at all, especially in very tricky windy conditions.

The performance of Eoghan O’Flaherty in particular was a joy to watch and the final score of the game, a ‘45’ from the boot of the Carbury man, after three earlier attempts by goalkeepers Mark Donnelly and Shane Connelly ended with wides, probably put a quick end to that experiment.

Eoin Doyle, who showed up well early on was forced off after going over on his ankle but hopefully will not be out for long.

Daniel Flynn was substituted just before the break after a Galway player required attention following an off-the-ball incident; the Johnstownbridge player, at the behest of the match official, took no more part in the game.

Kildare, playing with the aid of the strong wind opened brightly with the front men firing over some impressive points and by nine minute sled by 0-5 to 0-1.

Galway, who threatened early on ‘down the middle’ were unlucky not to find the net when a David O’Connell shot crashed off the crossbar and out of danger.

Galway certainly found the windy conditions difficult to come to terms with and struggled to find the posts trailing at the break by 0-11 to 0-4.

Kildare still led 0-15 to 0-6 after 50 minutes before Galway hit six points on the trot to leave just three separating the sides.

Peter Kelly got forward to easy the home side’s anxiety and while Seán Armstrong got one back for the visitors it was Kildare who finished the stronger with two brilliant scores from Eoghan O’Flaherty, the first from the outside of his right boot and the second a ‘45’ against the strong wind ensured that Kildare would record a win on this momentous day for Moorefield on a score line of Kildare 0-18 Galway 0-13.

Overall a very entertaining game with both sides reasonably happy. Galway got right back into late on and amongst the substitutions late on were two lads, Michael Walsh and Tom Flynn, who pocketed All Ireland U21 medals on Saturday night when Galway defeated Cork.