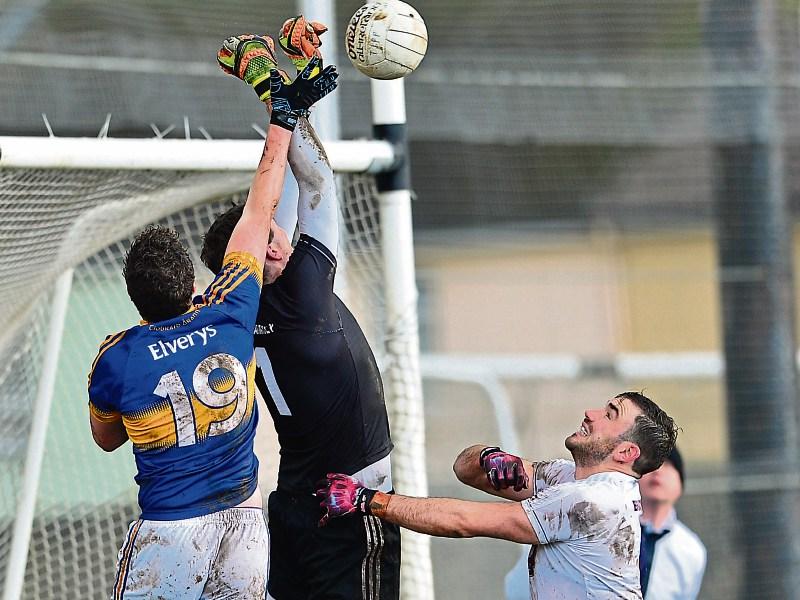 Kildare goalkeeper Mark Donnellan, with support from Fergal Conway, clears the ball from Billy Hewett of Tipperary in the AFL Div3 game at Clonmel

Kildare secured promotion to Division 2 of the Allianz Football League following a comprehensive win over Tipperary in Clonmel on Saturday.

There was controversy in this one even before a ball was kicked with the venue changing from Semple Stadium to Tipperary town and eventually Clonmel GAA Field (as described in the official programme).

Despite all the hastle and playing in a ground that leaves a lot to be desired at this level of inter-county activity Kildare came through with flying colours and can now face into Sunday's final game in the League with no worries as they welcome Clare to St Conleth's Park.

Clare have still a lot to play for as victory would ensure them taking the second promotion place and a spot in the League final in Croke Park against Kildare on Saturday April 23 along with the Division 4 decider.

A big worry for Kildare is the injury picked up by Daniel Flynn in Saturday's victory.

Just returned following a hamstring injury that saw him miss a few games, the Johnstownbridge man had a fine game, scoring 1-2, was about to be replaced after informing the Kildare management he felt his hamstring tightening. However before the substitution could be made Flynn was put through on goal and while his shot went over for a point he did his hamstring again, the fourth time he has suffered this injury in recent times.

Too early to say how long he will be out but definitely won't be lining out on Sunday.

Apart from that it was a comprehensive win for The Lilies; some very encouraging displays against a Tipperary side that could have been a lot closer (especially at half time) if the had taken just a small proportion of their chances.

For Kildare it is onwards and upwards (hopefully) a league final before championship time arrives.

Full report and analysis in this week's Leinster Leader