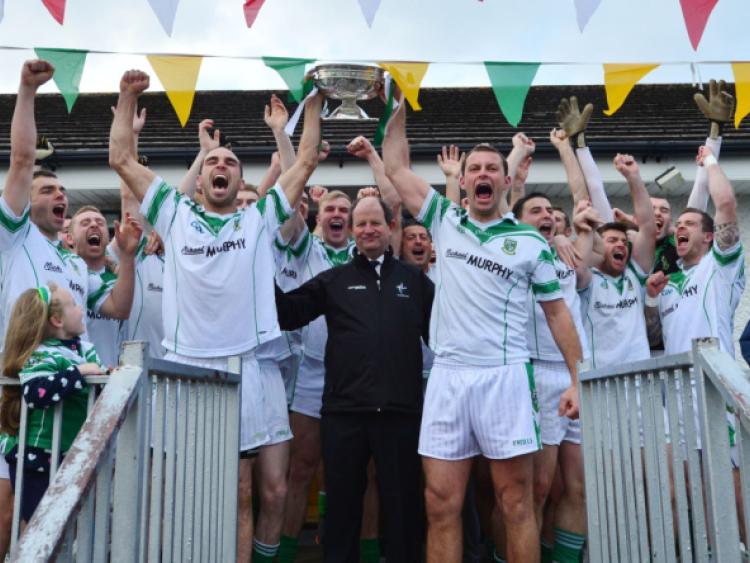 AS the curtain fell on another senior football championship last Sunday, there was a familiar act holding centre stage to take the plaudits out on the hallowed turf of St Conleth’s Park.

AS the curtain fell on another senior football championship last Sunday, there was a familiar act holding centre stage to take the plaudits out on the hallowed turf of St Conleth’s Park.

Although one of the oldest clubs in the county, it was in that same place some 14 years previous where they had made their initial appearance and quest to change the landscape of Kildare club football.

A few years later and they are still at it. That desire to be the best remains, that drive to call themselves one of the greatest club sides of any generation, not just in this county, is never more defined. Having defeated the best en-route, they once again can call themselves the top dog.

But there was something sweeter about this latest triumph that had Moorefield licking their lips like Chesire cats. It wasn’t just the fact that many of this current crop had won a sixth county title since their breakthrough success of 2000, nor was it simply the fact that they had dethroned their nearest-neighbours that they share Newbridge with, Sarsfields.

Neither was it that the Moores, in claiming their latest triumph – their 27th notable adult title since the turn of the millennium - had just completed a clean sweep at senior level for the season. It was deeper than that, something bordering on redemption, as if to give the proverbial two-fingers to those who had written them off in the time since their last SFC victory in 2010.

Yet, during the opening 30-odd minutes those critics were sharpening their pencils once again as they began penning the closing lines of this great Moorefield side’s final chapter. Three quarters of an hour or so later and those same sticks of lead were without tips, broken off as Moorefield faced down the barrels of defeat to win with plenty to spare.

Like a deranged gunslinger whose destiny rested in the finger-tips of someone else, Moorefield didn’t wait for their opponents to draw first. They had somewhat been saved by the intervention of the half-time whistle, but when another chance presented itself, they took it with both hands and fired at will.

The three-point half-time deficit that they faced into upon the restart was wiped out and indeed over-turned by the end of the third quarter with little consideration. That might have happened earlier only for a brilliant save by Sarsfields goalkeeper, Patrick O’Sullivan who dived to his right to push away a 34th minute Ronan Sweeney spot kick.

Still, all the momentum was with Moorefield and as Sarsfields’ gradual decline made them look like a beaten team long before the long whistle, there was only going to be one winner.

Sweeney, a veteran of many of these days and who only months previous drew the line under a distinguished inter-county career that has since seen him move into coaching with Waterford, was Moorefield’s main man, pulling the strings from deep and enjoying a freer role having had his contribution somewhat restricted to free-taking duties during the first half.

Not that he didn’t master that either, but with ball in hand in the open spaces, his role in linking defence with attack was far more beneficial to Moorefield’s greater cause. He was ably assisted by one of the next generation, Adam Tyrell, who weighed in with four points from play as if he was a permanent fixture on county final day. Goals from Patrick Murray (57) and Ger Naughton (63), fellow long-serving comrades of Sweeney, were the final nails in the Sarsfields coffin.

Yet, it might have been so different if Sarsfields weren’t so wasteful during the first half. Their decision to open up the game early on to the wings reaped sufficient dividends, with quick and direct ball seeing them hold three point leads after 16, 29 and 31 minutes, culminating in a 0-10 to 0-7 interval lead.

That though was a minimum that they deserved given the pace and thrilling nature that they brought, and in truth it should have been at least double that figure given the chances that they created, if not squandered.

But in the second half Moorefield squeezed and narrowed the play so much that Sarsfields, beginning to run on empty following their first half excursions, had nowhere to play. For Moorefield, their counter-attacking football went out the window too and with Sweeney pulling the strings now at midfield, it was they who dictated matters to devastating effect.

There was a notable increase in their tempo too and when Murray and Tyrell pointed inside the first three minutes of the second half, Sweeney’s chance from the penalty spot should have hammered home their growing dominance.

Sarsfields were in disarray but no matter what they tried they couldn’t stem the Moorefield tide. The Sash reduced the arrears to the minimum by the 54th minute but chasing a lost cause without much conviction, they were twice punished during the closing minutes by Murray and then Naughton as Moorefield reclaimed a title that they have become all too familiar with in recent years.