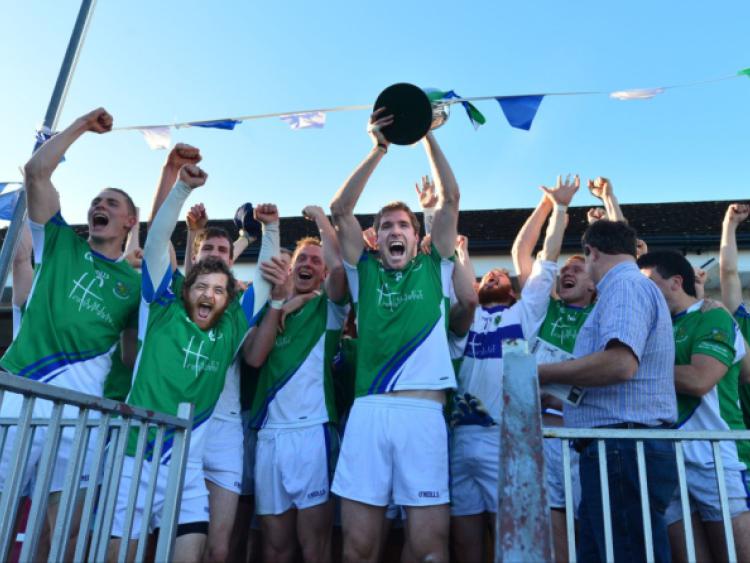 After flattering to deceive on so many occasions in recent years, Johnstownbridge – once the kingpins of Kildare club football – can once again call themselves a senior club after they defeated Castledermot to finally win the Intermediate Football Championship in Newbridge last Saturday afternoon.

After flattering to deceive on so many occasions in recent years, Johnstownbridge – once the kingpins of Kildare club football – can once again call themselves a senior club after they defeated Castledermot to finally win the Intermediate Football Championship in Newbridge last Saturday afternoon.

Not since 2004 have the ‘Bridge graced the top table in this county, but with the Hugh Campion Cup in their possession since they last won it in 1978 prior to their glory days, all recent disappointments and hard luck stories, including five IFC semi-final defeats in the last eight seasons, will be confined to a less than memorable chapter of the club’s history.

Upon the long whistle, players, management and supporters celebrated amongst one another as if there was no tomorrow, a clear indication of the magnitude of the feat achieved by arguably the most exciting crop of young footballers around at present.

They had played plenty of wonderful football in getting to this decider, scoring a staggering 9-76 in just five games, but while finals can often be forgettable affairs, this was anything but as Johnstownbridge turned on the style one more time.

In the end they won by seven points but few would have begrudged them if they had won by twice that such were the chances that they created, particularly in the first half.

Whilst never overly troubled, a first half stoppage time goal – which had been on the cards as early as the opening minute – from full-forward Niall Vaughan offered a more concise reflection of how proceedings were unfolding. A second goal from McNally five minutes into the second half ended the game as a contest.

With expectations rising year on year as the next crop of stars tried their luck at leading the club back towards the top, Johnstownbridge were, however, regularly labelled as a bunch of individuals with undoubted quality but with a suspect mentality. This current Johnstownbridge outfit have dispelled those notions.

From goalkeeper, Ian Farrell to Cathal McNally at top of the left, Johnstownbridge were much the better than Castledermot in every department. They played with skill, pace, power and undoubted self-belief that allowed them to mix the necessary with the brilliant.

They had ace performers throughout the park and unsurprisingly given the arsenal that they have in their locker, much of their quality was best witnessed from the middle third on. Sean Hurley bossed the skies above a sunny St Conleth’s Park alongside Barry McNally, while the Cribbin brothers, Paul and Keith, together with Australia-bound Daniel Flynn, brought the drive for the likes of Vaughan and Cathal McNally to pull the trigger.

Johnstownbridge laid down the gauntlet and only for the width of the post they and McNally would have had a goal inside the opening seconds. Instead they had to make do with unanswered points from Hurley (free) and Paul Cribbin after two minutes. Their blistering start continued unabated and by the fourth minute Hurley had pointed from 40 metres to make it a 0-3 to 0-1 game.

Yet, while regularly carved open through the middle by Johnstownbridge’s blistering pace, Castledermot, naively in hindsight, adhered to their script and pressing their opponents hard high up the pitch, turnovers were aplenty. By the tenth minute, with Paddy Mahon showing unerring accuracy from placed balls, Castledermot found themselves 0-4 to 0-3 in front.

However, they remained susceptible to Johnstownbridge’s hard running and ability to flood numbers forward into the open spaces and after losing their way somewhat, Paul Cribbin, McNally and Hurley (2), propelled Johnstownbridge’s confident swagger into a 0-7 to 0-4 lead after 19 minutes.

That advantage was briefly reduced to the minimum by the 27th minute but still the force remained with Johnstownbridge who, had their final ball to hand been more sharper, could have found the net on at least a couple of occasions.

That goal however, did come in time added on, the end product of yet another sweeping move that saw Cribbin brothers create the initial opening, prior to Vaughan stealing in to slip a neat finish low past ‘keeper, Paul Murphy for a 1-7 to 0-6 interval lead.

Surprisingly Castledermot didn’t address their glaring shortcomings during the break and indeed were left to rue that when, following an early Hurley point (free), Vaughan was quickest to react and power home to the roof of the net after a Paul Cribbin effort came back off the post.

At that juncture it appeared to be game over with Johnstownbridge 2-9 to 0-6 in front but credit to Castledermot who never threw in the towel and a quick-fire 1-2 by the 41st minute, the goal an astounding individual effort by Eugene Mahon, reduced the arrears to four points. That though was as good as it would get for Castledermot, as during the final quarter Johnstownbridge plundered four successive points between the 46th and 54th minutes to wrap up the win.