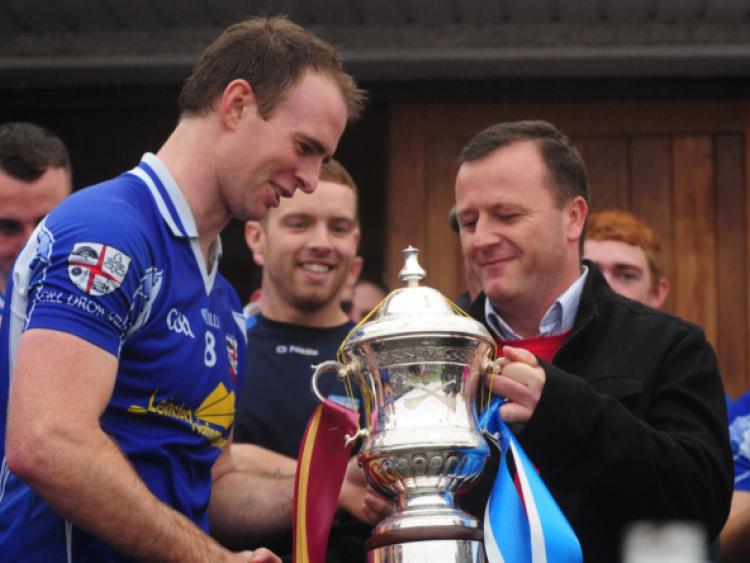 CELBRIDGE dispelled any notions that they were a waning force when, last Sunday afternoon in Newbridge, they proved that form is temporary and class is permanent by regaining the Kildare SHC title.

CELBRIDGE dispelled any notions that they were a waning force when, last Sunday afternoon in Newbridge, they proved that form is temporary and class is permanent by regaining the Kildare SHC title.

A year after their hopes of winning a fourth successive county title were dashed by Confey, Noel McMahon’s troops returned to a place that they have become all too familiar with in recent years to see off an Eire Og/Corrachoill side who were appearing in their first county final since 1999.

In winning a fifth championship in nine years, Celbridge saved their best for last as they turned in their most convincing performance of the season to become the first winners of the Tony Carew Cup.

The foundations for this latest Celbridge triumph, just hours after their intermediate hurlers also tasted championship glory at the same venue, were laid during the wind-up to the first half, during which they plundered six unanswered points between the 22nd and 29th minutes that helped them into a three point lead, despite conceding two quick-fire goals earlier in the first half.

Although Eire Og would wipe out that interval advantage inside four minutes of the restart, the effort that it took the Donore men to do just that robbed them of the needy to then get their noses in front. Instead, Celbridge hit back with the next three points by the 37th minute to move clear once again, a lead that they would never relinquish before the long whistle.

Those bursts from Celbridge typified their day. While the better side all round in most facets, their first touch was sharper and they used possession more economically. Furthermore, they found it a lot easier to get scores, particularly points from play; of their 0-23, 16 came from play, more than twice as many as Eire Og (7), although they did twice find the net from open play too.

Strangely, after recovering from an encouraging Celbridge start that yielded successive points from the hugely impressive duo of Tony Murphy and Mark Moloney either side of a brace of Billy White frees inside the opening five minutes, before White (free) made it a 0-5 to 0-1 game after eight minutes, Eire Og put their glaring nerves to one side long enough to raise two green flags in quick succession, the first from midfielder Paul Kennedy after nine minutes, prior to Joe Dempsey finishing to the net a rebound from a saved Paul Dermody penalty three minutes later, to raise the roof of St Conleth’s Park.

Those majors gave Eire Og - for whom former Thurlse Sarsfields star Johnny Enright got on plenty of midfield ball – added belief, however briefly, and Declan O’Toole pointed after 21 minutes to increase his side’s lead to 2-2 to 0-6.

However, from there Eire Og were beginning to lose their way again as Celbridge’s half-back line and midfield begin to dictate, while Murphy – now out at centre-forward from the corner - and Moloney continued to win and carry plenty of ball.

Moloney, Danny Butler, Sam White, Gerry Keegan (2) and White (free) all pointed to turn a two point deficit into a four point lead, only for Paul Clifford to peg one back before the change of ends, into which Celbridge carried a 0-12 to 2-3 lead.

There was fire in Eire Og’s belly upon the restart despite the greasy and wet conditions, and points from O’Toole (2) and Kennedy restored parity.

Celbridge though, with more options, were soon back in front courtesy of three successive points of their own, a trait that would be repeated again and again when it was felt that Eire Og were getting too close for comfort.

They decisively repeated that trick from the 51st as Celbridge put the game to bed, White, Keegan (3) and Butler increasing their side’s lead to 0-23 to 2-10 as the clock ticked into time added on. Evan Dempsey, extremely well marshalled by Tom Finnerty, pointed his first of the game moments later but it was nothing more than a consolation.