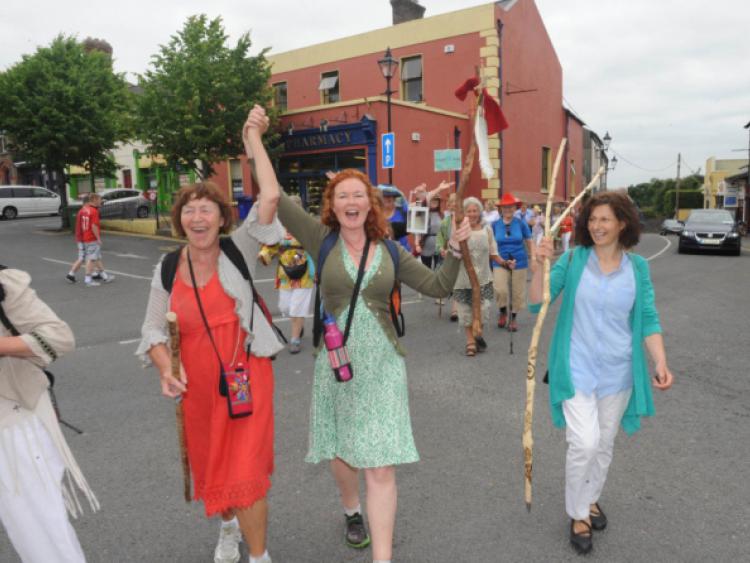 A number of pilgrims made the maiden trek from Louth to Kildare in the footsteps of Brigid to arrive in Kildare Town on July 15.

A number of pilgrims made the maiden trek from Louth to Kildare in the footsteps of Brigid to arrive in Kildare Town on July 15.

“It was one amazing experience. We had 16 people who walked the entire way but we were joined by people in Robertstown, by a group of people as we came into Kildare town and also at the Hill of Tara. There was a great generosity of spirit within the communities.” explained one of the founders, Dolores Whelan.

The walkers, who hailed from Australia, the UK, America and Ireland set off from Brigid’s Well and Shrine in Faughart near Dundalk.

The pilgrimage wound its way through many sacred places including Donadea Forest.

Founded by Karen Ward, holistic psychotherapist and author and Dolores Whelan, spiritual teacher and author, the opening of this ancient pilgrimage route honours Brigid, Goddess and Celtic Christian saint, who has strong likes to Kildare.

“We were greeted by the Brigidine Sisters coming into Kildare, - Sr. Mary, Sr. Phil and Sr. Rita. We had lovely tea and were also welcomed by Mario Corrigan, the Heritage Officer and Tom McCutheon from the Heritage Centre,” explained Dolores.

Along the route pilgrims experienced some of Ireland’s peaceful and inspiring landscape and sites of spiritual significance, including Knockbridge, Hill of Slane and Tara. However, Dolores said it was hard to cope with the heat but no one complained.

She said there were many blistered feet and one walker from Australia became known as the “Queen of the Blisters.” However, spirits remained high. With the first ever walk completed, plans are in place for next year’s pilgrimage. You can find out more on www.brigidsway.ie or Brigid’s Way on facebook.

Dolores said everyone who participated really enjoyed the special journey.