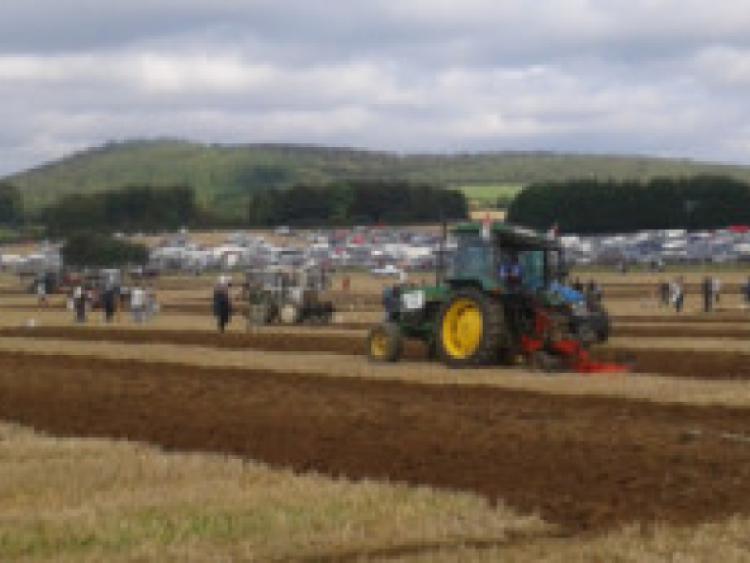 “What’s a pluffing championship?” my son looked at the ticket with concern. His reading is coming on nicely but he occasionally gets stuck on the correct pronounciation of ‘ough’.

“What’s a pluffing championship?” my son looked at the ticket with concern. His reading is coming on nicely but he occasionally gets stuck on the correct pronounciation of ‘ough’.

“Look out for my friend. He was wearing glasses,” said my daughter as I left the house to head down to Ratheniska and the 2013 Ploughing Championships last week. She had been the previous day and was full of animated chat about a man who had given her free tea and a biscuit and spent thirty minutes discussing God with her beside a muck spreader.

This year the Ploughing Championships covered seven hundred acres and is the largest show of its kind in Europe. A staggering 60,000 cups of tea and 30,000 breakfast rolls were sold each day. I was one of a hundred thousand people and on a mission to find the Born Again Christian and say “Hello” from my daughter. I knew that wasn’t going to happen the minute I went through the entrance and a stall caught my eye. There in front of me was an exact replica of the sapphire and diamond necklace that Kate Winslet famously wore in the movie ‘Titanic’. “I’ll do you a deal. It’s yours for twenty Euro” the stallholder said, holding the necklace up to my nose.

From the neighbouring stall, another trader called me over, “Look at THESE”. He waved a bunch of industrial bungee ropes up in the air. “Five Euro each”. That was just the start of what was on offer to anyone who was there to shop. Last Wednesday, I could have bought a cattle crusher, a robotic milking machine, a steel clad shed (that would house five hundred sheep), tonnes of chicken feed, some shearing sheers, a combine harvester and a bull. I did end up treating myself to something. A man from Leitrim talked me into buying a French garlic peeler, a garlic grater and a garlic brush (here I sit twenty four hours later and I am still not sure what that small brush does). After wandering around in the heat for two hours and covering just a quarter of the site, I needed a drink.

Next I passed a quiet man sitting beside a Prize Bull. “Would you like to enter a raffle?” he said. “You could win a pure bred registered Heifer with a value of €1500”. I consider myself a lucky person and so it was purely practical reasons that stopped me entering. The bull would struggle to fit into a house with two small dogs and three rabbits. Other first prizes on offer last week were two tonnes of feed and an agricultural building. Must haves for any farmer.

Desperate to sit down, I spotted an empty chair in a large marquee where a crowd had gathered. A shearing competition was in full swing. It was the ideal way to get a bit of piece away from the ninety nine thousand people milling around outside. Upon the stage, three shearers were in the middle of a fierce battle. Colette Deegan was neck and neck against James Corrigan. Each shearer was dressed in the standard uniform of blue trousers, a vest and moccasin shoes. My eyes were on Collette from Wicklow. In the time it would take me to shave my legs, she had sheared five sheep. It’s no wonder that this woman has been a ‘Queen of the Shears’ titleholder.

After an hour of shearing, it was back outside where I soon found myself in the thick of it, totally swamped by the crowds. As I sent a text to share my joy with a friend, I walked head on straight into a farmer from Kerry with a tummy on him the size of a space hopper. I bounced off him, went through the air and into the arms of a strong young farmer dressed in a one-see.

Uninjured but recovering from my ‘bounce off’, I took refuge beside a Massey Ferguson tractor. Like bees round a honey pot, this iconic piece of farming kit was covered in men all wanting to sit in the seat and take a look inside the cabin.

The last time I felt so claustrophobic was watching Amy Winehouse perform at Oxygen in 2008. I was in the ultimate toy section for farmers and everywhere I looked, they were huddled around massive machines, whispering and doing deals.

I had spent seven hours in the fields of Ratheniska but there was still time for one more.

At a festival that prides itself on ploughing, it would have been mad not to go and watch the competition in full swing.

The sight of thirty tractors, tilted over, gently turning the land was the icing on the cake. Go down next year, buy yourself a Titanic necklace and if you see the Born Again Christian with the glasses, tell him that my daughter said ‘Hello’.