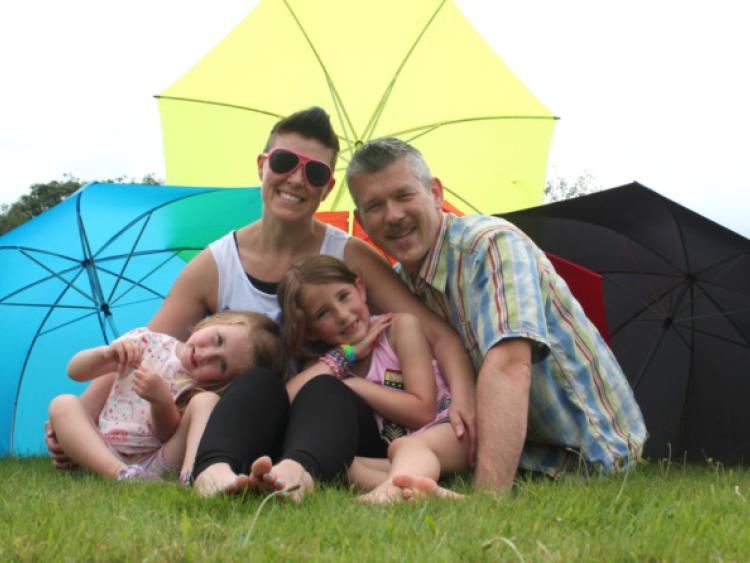 As a young girl, one of Carmel Ging’s hobbies was writing to pen pals from across the world. After six years exchanging letters one of them, Craig Lucas, paid a visit to Ireland and the pair met face to face for the first time.

As a young girl, one of Carmel Ging’s hobbies was writing to pen pals from across the world. After six years exchanging letters one of them, Craig Lucas, paid a visit to Ireland and the pair met face to face for the first time.

Little did Carmel know that the handsome young biker with the soft London accent and a twinkle in his eye would one day save her life.

Carmel is the eldest child of Kathleen and Liam Ging in Narraghmore and has one brother and three sisters.

She attended Crookstown primary school and went to secondary school in Dunlavin before going to Youthreach in Athy for a couple of years.

“Craig visited Ireland, then I went to London and visited him. We had been pen pals for about six years. It wasn’t exactly love at first sight, but eventually we got together.”

In July 2002 the fairy tale was complete - the pair were married at her home town church surrounded by family and friends.

They were happily settling into married life when Craig made a discovery that was to change both of their lives. In February 2004 he noticed a lump under his young wife’s arm.

“She was very stubborn,” said Criag. “She kept saying it was nothing but I wouldn’t let it go. Eventually she went to the doctor.He agreed with her and said it was probably nothing. He told her, “you’re too young”. But he sent us to the hospital anyway and again they thought she was too young. It was something we heard again and again, that Carmel was too young for it to be cancer. But they did a biopsy anyway.”

The day before their second wedding anniversary, Carmel had an appointment to get the results of the biopsy.

“I knew something was up. We were left waiting until last.They just told us to sit down. They said they were sorry, it’s not good news. It was a huge shock to the system,” said Craig.

“They gave us a few minutes to absorb the news, and then launched into what we were going to do next, explaining the treatments. I was numb, shocked. I wasn’t really able to feel anything,” said Carmel.

Within a week Carmel was in hospital having surgery to remove the cancerous lump as well as tissue surrounding it.

She was then referred to an oncologist, Dr. Kyron Bolger in Tullamore hospital.

“He was just fantastic. The surgeon was very good obviously but he was also very matter of fact. Kyron Bolger really humanised the whole thing and helped us through it not just physically but also emotionally,” said Carmel.

Craig was working at Wyeth in Newbridge at the time and juggled shift work with bringing Carmel to hospital appointments. “Obviously it was Carmel who was having to deal with it and I just wanted to be there to help her as best I could. I had to be strong for her and hold her up. It did occur to me that I might lose her but the hospital was very positive and so were we.”

“It was sometimes in the back of my mind that I might not get through it,” said Carmel, “but I was concentrating on fighting. They said the treatment would be hard but there was a very good chance that I would pull through and that everything would be ok. They were very positive so I was too.”

One of the more difficult side effects of the harsh chemotherapy was that Carmel, still in her twenties, might become infertile. “It was a blow, but we felt we’d get Carmel through the treatment first and worry about that afterwards,” Craig said.

Even though the young couple were just concentrating on the present predicament and beating the cancer, Dr. Bolger was thinking ahead.

The oncologist gave Carmel a very high dose of chemotherapy over a very short period of time. This meant that while the treatment was extremely hard on Carmel, her chances of conceiving afterwards would be increased.

“I’m a fighter by nature anyway. I was so shocked but just got on with it. Going through this I was kick ass, here we go, bring it on. I’m very stubborn and that helps. I did get emotional sometimes but just bottled it and got on with things really.

“Losing my hair didn’t bother me too much. Yes, I’m into my image but I got Craig to shave it and that was hard - hard for him and hard for me. We both felt teary eyed and scared at times.

“The hardest part was the unbelievable weakness, the complete and utter exhaustion. I was going through chemo and I wasn’t even thirty and was so tired all the time like an old woman. It was tough but that’s life. You just have to get on with it.”

After two months of intensive chemotherapy she had a short break, and in January spent six weeks mainly as an inpatient at St. Luke’s Hospital getting radium treatment. Next she had hormone therapy to boost her fertility, which she also found extremely difficult. And then she was given the all clear.

Against the odds Carmel fell pregnant almost immediately. “I did about four pregnancy tests - I just couldn’t believe it. I was so emotional and so blessed.” Their little miracle, Calista, now seven was born and four years later another bundle of joy, Milla (3) arrived. “To say we were overjoyed would be an understatement,” said Carmel.

Craig heard about the Shave or Dye event for cancer and he ended up with hot pink locks for his trouble. The couple also did Runamuc, and Carmel did the Race for Life with Craig’s mother, sister and niece in England.

Carmel walked among the survivors in the first Kildare Relay for Life event for the Irish Cancer Society last year, and she also did the Flora women’s Mini Marathon.

This year the couple both did the mini marathon, Craig standing out from the crowd in a rather fetching cheer leader outfit!

Carmel plans to walk with the second Kildare Relay for Life event taking place on 6 and 7 September at the Curragh racecourse.

Their advice for people reading this? “You’re never too young to get cancer. Breast cancer can hit men and women, young and old and it might not be on the breast - Carmel’s lump was under her arm. If something doesn’t feel right, go and get it checked.”

She has posted a photograph of her scar on Facebook. She feels it’s a reminder of the greatest battle of her life - a battle in which she was victorious. “It’s a scar, it’s there for a reason, it’s a good scar.”

Something tells me there are not many battles this petite young woman with the heart of a warrior will lose.