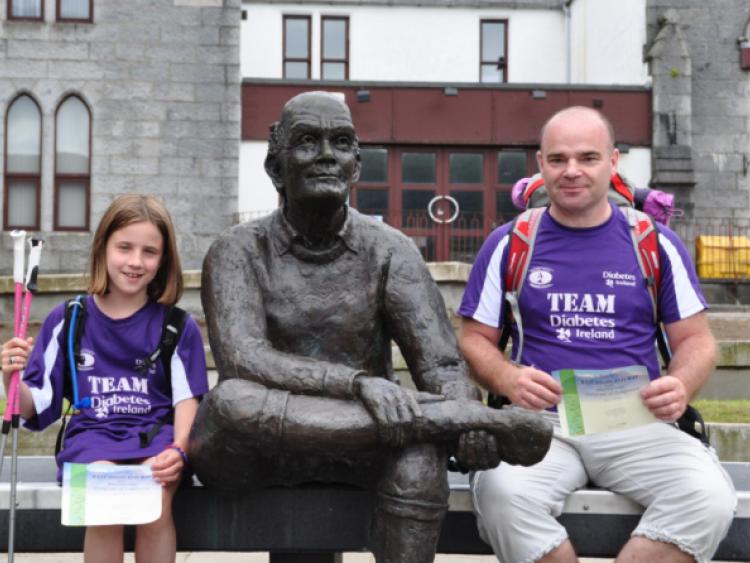 Ten-year-old Ella Locke set out on a mission this summer to prove that having a serious illness doesn’t stop people from having a normal life.

Ten-year-old Ella Locke set out on a mission this summer to prove that having a serious illness doesn’t stop people from having a normal life.

The Clogherinkoe girl, accompanied by her dad Stuart, has just completed a 96-mile walk in Scotland to raise funds for Diabetes Ireland and JDRF, an international research organisation. As of the time of writing, the schoolgirl had raised nearly €3,500, smashing her target of €2,000.

With approximately 191,000 people in Ireland living with Diabetes, an extra 30,000 people with undiagnosed Type 2 Diabetes and a further 146,000 people with pre-diabetes, the need for services and education from Diabetes Ireland has never been greater. With current growth levels in the condition described by the World Health Organisation as an “epidemic” these numbers are forecast to increase greatly in Ireland.

Ella loves horse riding, swimming and playing with her friends, and has ambitions to be either a singer or a teacher when she grows up.

She was diagnosed with diabetes in October last year.

“Like most young kids, I just want to be able to have a normal life, but now I have to really monitor what I eat and inject daily as well as prick myself to monitor by blood sugar levels,” she said.

She added that she decided to walk the West Highland Way to raise awareness of her illness as well as money for her charities.

“ If I can raise awareness , then maybe someone will pick up on the signs of the illness before things get to a serious condition. My mum and dad have taught me through this experience that exercise is also important to controlling my levels. I loved walking the West Highland Way with my Dad, family and friends and would certainly do it again. I am now planning my next challenge.”

Scotland’s West Highland way is 154Km (96miles) which means Ella and Stuart averaged 22km per day. This was a fantastic achievement for someone so young, especially as she was also monitoring her blood sugar which is a daily part of life for children with Type 1 Diabetes.

Ella’s father Stuart, who accompanied her every step of the way said, “As with all families, we want our kids to be healthy and have a normal life. When Ella was diagnosed, it really was a huge change to begin with, but we quickly realised that like other long term illness’s we can control it with proper care.

“We looked at diet and exercise as a means to this type of control. We also realised that every day would be different, no matter what we try sometimes the body dictates how the blood sugar levels with react.”

Taking exercise through walking played a major part of Ella’s controlling her condition. “Within a month after leaving hospital she had begun this new interest,” he said. “I see walking as time to spend with my daughter and enjoy her life but in the background I am hoping it educates her for the future, so that she lives a healthy normal life. Walking the West Highland Way was a part of this education. Her blood sugar levels behaved really well on the trip which we had been mindful may not have been the case so it’s now onwards and upwards on our next adventure.”

Diabetes Ireland Partnerships & Events Manager Gary Brady said, “Ella is an inspiration to all children and has shown tremendous support for Diabetes through this trip. Like all charities we would not be here without the support and work of people like Ella and the Locke family and we are greatly appreciative of all they have done”.

You can still sponsor Ella at www.mycharity.ie/event/walkingfordiabetes.