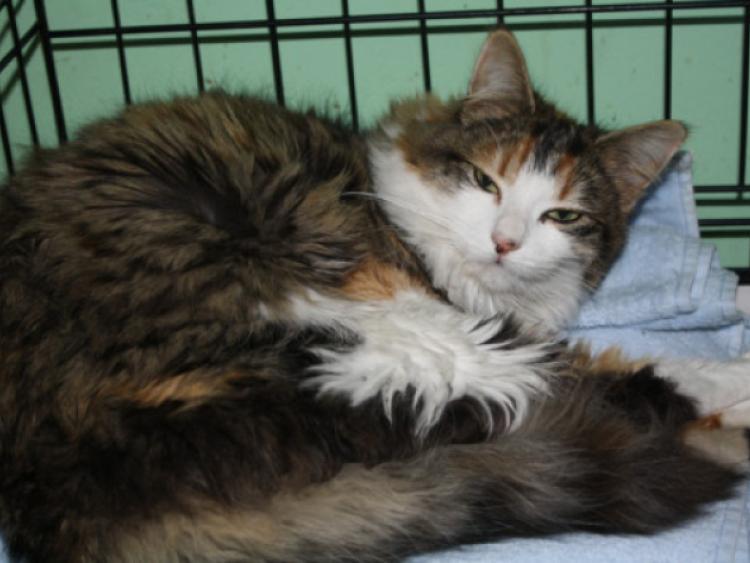 One afternoon the week before last we received a call from a very distressed lady in Newbridge about a cat that had been stuck up a tree in her garden.

One afternoon the week before last we received a call from a very distressed lady in Newbridge about a cat that had been stuck up a tree in her garden.

The caller was very concerned and understandable worried for the cat as it had been up there for nearly two days.

The poor cat was frozen at the very top and would not budge no matter what they tried to coax her down with.

After making several phone calls, and with no one able to help her, they called us.

We sent our volunteers Michael and Evan to the scene immediately to see if they could help.

After assessing the situation it was clear that the cat was not going to come down on her own. Michael bravely made the decision to climb up into the tree.

After spending fifteen minutes in the tree, he climbed safely back down with the very frightened and hungry cat.

She must have known that he was helping as she never once bite or scratched him as she was been carried down to solid ground.

As the cat was wet, cold, hungry and very shaken up, she was brought back to the shelter so she could recover from her ordeal.

The next morning we got call from a lady who was missing a cat fitting the description of the animal that had arrived the evening before.

The cat was also missing from the very same area that our cat had been rescued just 24 hours beforehand.

After looking at a picture she had posted on our Facebook page, I made the call back to her and broke the news that indeed it was her cat.

The very excited and emotional lady couldn’t believe it and could not have been happier to learn that her pet was safe and sound at the shelter.

She had searched everywhere for her much loved pet and was going out of her mind with worry.

That afternoon both relieved owner and cat were reunited.

It was a very joyous reuniting and everyone is happy that Tali the cat, pictured above, is back where she belongs. Her owner is now going to get her micro chipped in case she gets into any more trouble in the future and can be identified and reunited with her family much sooner.

Well done to Michael and Evan for such a great rescue. We love happy endings for the animals that we help!