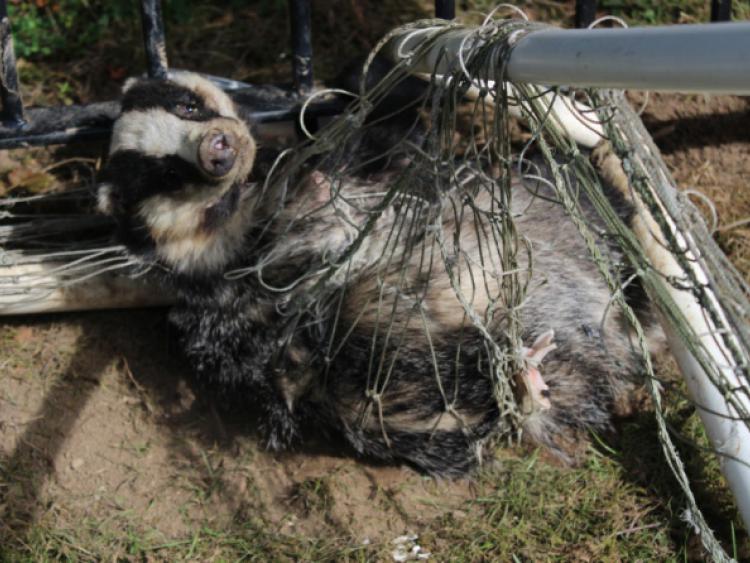 Back garden football nets can be a serious danger to wildlife, writes Dan Donoher of Kildare Animal Foundation.

Back garden football nets can be a serious danger to wildlife, writes Dan Donoher of Kildare Animal Foundation.

We recently got called out to attend to a very distressed badger.

The call came in two weeks ago on a Tuesday morning, when a member of the public had called National Parks and Wildlife Service about a badger caught in a football net in Naas.

I gathered up all the equipment that we would need for a specialist rescue like this.

Badgers are big animals, can be difficult to handle and should be only handled by people who have been trained and have experience.

I assisted Ciara Flynn from NPWS to the scene on the outskirts of Naas town. The badger had managed to get itself tangled in the net of a children’s old goal post, and then managed to drag it out of the garden and then across the road before it got lodged at a fence.

It’s most likely the badger had been a regular visitor to the garden in search for food and somehow on this occasion had become entwined.

The call came in just before 9am as someone from the estate was leaving for work.

The badger had most likely been in distress for a good few hours before being found.

We secured the badger with a grasper before going about cutting him free.

The badger was exhausted so didn’t put up a huge fight as we freed him.

After about five minutes we had him secured into a large pet carrier.

He had severe wounds around his ears and head. His front leg was swollen twice the size it should have been and he had other minor cuts and bruises.

We took the young adult male badger back to the shelter where he was given fluids and pain relief after his ordeal and was then left alone for a few hours.

We then cleaned his wounds and started him on a course of antibiotics.

He has responded well to treatment and is making great progress.

We hope to have him returned to the wild in the coming week.

We urge anyone with any football nets to lift them a few feet off the ground when not in use.

Lots of different animals can get into trouble in this way.

Dan Donoher of Kildare Animal Foundation writes the weekly Pet Rescue column in the Leinster Leader. The shelter is a voluntary organisation that provides a safe haven for abused or neglected animals. Tel: 045 522929 or log on to www.animalfoundation.ie to make a donation.