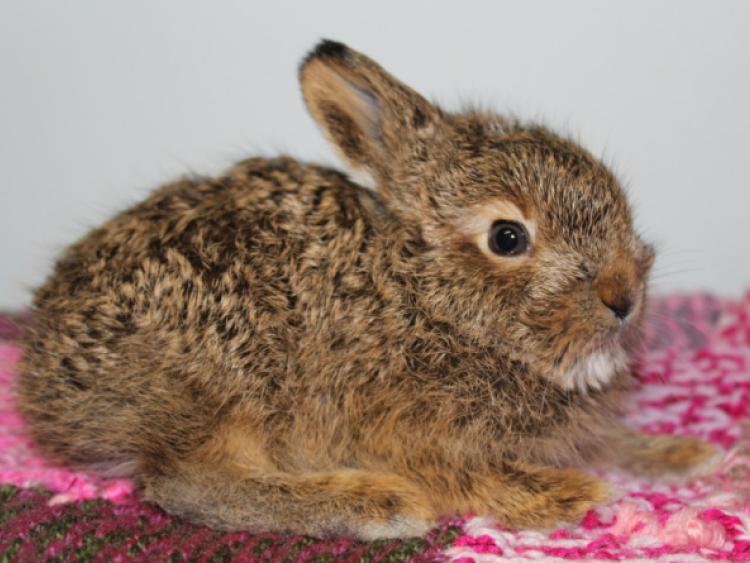 Kildare Animal Foundation received a call from a lady after her dog had unfortunately caught the leveret and brought it to her back door.

Thankfully, she managed to get him off her before serious damage was done to him. The little leveret was cold and in shock so the lady warmed him up gently and kept him quiet.

As the lady lived in Galway we were able to call on our friend Mary from the Galway Swan Rescue. For four days Mary took great care of the leveret. He was put on a special milk formula which is he being fed on four times a day. He was then transported to us in Kildare so he can be hand reared and rehabilitated to go back to the wild.

Young hares are extremely difficult to hand rear due to their nervous dispositions. We have had years of successful hand rearing them as well as many other wildlife species.

He will stay with us for about 8 to 10 weeks until he is large and fit enough to return to the wild. Hares in the wild are becoming less and less common so it’s important that we play our part, albeit a small part, by returning some of these animals to the wild. We hope that they will go on to live and breed for many years to come.

The Irish hare (Lepus timidus hibernicus) is found only in Ireland and is arguably our oldest surviving Irish mammal. Its taxonomy is not straightforward, and many references continue to describe it as the mountain or blue hare, which is found in Scotland.

Until recently it had been regarded as a distinct sub-species of the mountain hare, but it is now known to have been present in Ireland since before the last ice age and there is emerging evidence that its genetic characteristics merit classification as a species in its own right.

Leverets are born fully furred, with their eyes open and weighing in at around 150 grams. Our little one only weighted 128g when he arrived at the shelter. The mother hides them in long grass or vegetation and only returns each night to feed them. During the day they remain absolutely still and rely on cover and camouflage to evade predation.

Even when exposed they are not likely to move, which leads people to believe they are injured or orphaned. It is not unusual to find a leveret on its own and it should never be removed from the wild unless it is in imminent danger.

Dan Donoher of Kildare Animal Foundation, the voluntary organisation that provides a safe haven for neglected or abused animals, writes the weekly ‘Pet Rescue’ column in the Leinster Leader. To contact the foundation, call 045 522929 or log into www.animalfoundation.ie. All donations welcome.