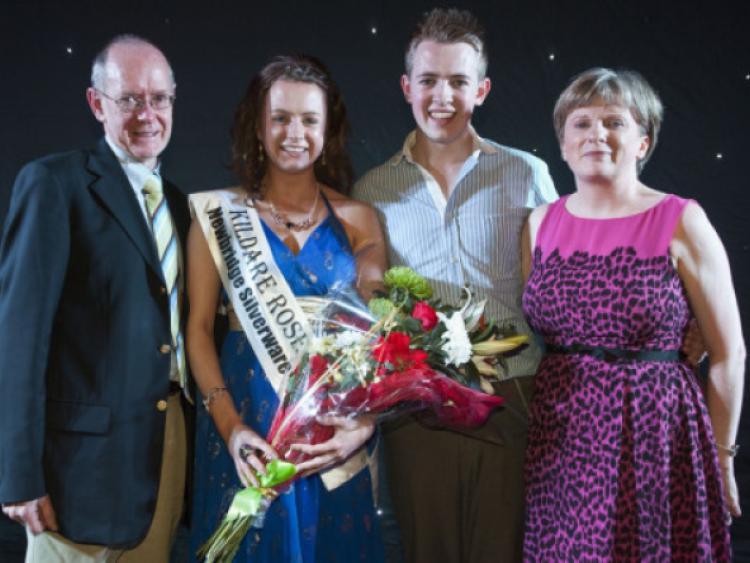 The 23-year-old Newbridge girl has had her voice trained at the Brendan Hartnett vocal academy, and has been a member of the Pamela Keeley and Leah Moran stage schools.

However, the student, who hails from Roseberry, doesn’t plan on treading the boards on a professional basis.

“Every so often I think I’d like to give it a go, but it’s more of a serious hobby,” she said.

Instead, the Economics and Finance graduate is currently doing a work placement with Ernst and Young, and she will start her masters in Economic and Financial Risk Analysis at NUI Maynooth in September.

The young businesswoman counts Mary McAleese, Frances Fitzgerald and Karren Brady among her inspirations in life.

The multi-talented former pupil at Newbridge College told the audience at last Saturday’s gala Kildare Rose selection night at Naas’ Osprey Hotel that she wants to help rectify the country’s economic wrongs... and advised them to take a punt on Ryanair shares if they hadn’t been successful in the Punchestown betting ring.

“It has been absolutely fantastic, I’m so delighted and I’d like to thank everyone who supported me - my sponsors, family and friends,” she told the Leinster Leader after her win.

Hannah will now go on to represent Kildare at the Regional Finals on the June Bank Holiday weekend in Portlaoise, where dozens of Roses from around the world will vie for a place on the Tralee stage later this summer.

Hannah gave her debs dress, a Sherri Hill number she bought in Soho Boutique in Whitewater, another outing for the Rose selection night last Saturday - but she won’t have to worry about a gown for Portlaoise as her dress is will be provided by Glamour Dress Wear in Clane.

Hannah was sponsored for the Kildare Rose by Shades ‘n Shapes hair salon in Newbridge. They have dressed her tresses since she was six years old, and also made sure she had not a hair out of place on Saturday night.

Hannah’s mum Angela is well known to many Newbridge people as the principal of the Holy Family Secondary School, and her dad Raphael was also cheering her on.

Her younger brother Daniel raised a few laughs during Hannah’s turn on stage when he was inspected as a ‘future escort’ by veteran Rose escort Peter Cooney.

The Sarsfields supporter recently completed her Royal Irish Academy of Music Grade 8 singing exam. She is also a member of the YCS and helps out with the annual Music & Drama summer camp. She is a member of Newbridge Parish Taize group and the Paradisum Choir, and is also a fan of reading, cross-stitch and skiing.

The rest of the Kildare Roses have promised to travel to Portlaoise next June to back Hannah on her journey.

“I really enjoyed getting to know the other girls, we had some nice days away. Our day in Waterford, where we went to Waterford Crystal and met up with the Waterford and Carlow Roses was a highlight for me,” she said.