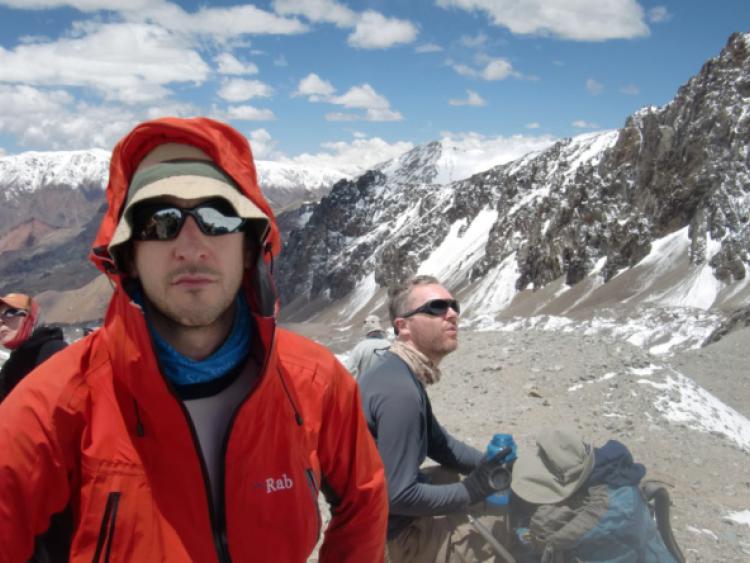 A Castledermot man is hoping to become one of only three hundred people in the world who have ever climbed the fabled Seven Summits, the highest peaks on each continent.

A Castledermot man is hoping to become one of only three hundred people in the world who have ever climbed the fabled Seven Summits, the highest peaks on each continent.

Niall O’Byrnes, 36, hopes to summit Mount Everest in early May, which will bring him to six out of the seven, in a pursuit that describes as “more of a hobby than my first sport”.

His friend, Longford man Paul Devaney kicked off the madness in 2007, when he encouraged a group of college friends to climb Kilimanjaro. Mr. O’Byrnes was one of them, and since then he has climbed Mount Elbrus in Russia, Mount Kosciuszko in Australia, Mount McKinely in Alaska and Aconcagua in Argentina at a rate, roughly, of one a year.

Other than Everest, which he’s training for at the moment, O’Byrnes only has Mount Vinson in Antartica left, which he hopes to do by the end of the year.

“Paul is the only one who’s done all six so far. I’m hoping to do it on December 13,” Niall told the Leinster Leader.

His first exposure to mountaineering came at Yosemetie Valley in California, which is says he “loved”.

“After we did Kilimanjaro in 2007, the seven summits thing kinda took on a life of its own and it ran away with itself.”

He explained that all of the climbs so far have been “a bit like an expensive holiday,” but Everest is something you won’t do for any less than €30,000, he admitted.

At the moment he’s submerged in very hard training - so much so that he imagines the ascent of Everest will be something of a welcome break from the grind of training!

“I’m up at half six every morning in the gym in Monread for an hour. I’ll hit the gym, as well as swimming, going underway to build up the body’s ability to deal with oxygen deprivation.

“I tend to do half an hour of cardio, and a lot of strength work, especially my glutes, core and shoulder.

“It’s important to keep them strong as well. They’ll be pretty much hauling me up.”

Then at the weekend, he’s doing six to eight hour hikes.

He’s bought lots of new climbing gear and is using these hikes as a well way of breaking it in.

The plan is to leave Ireland in the coming weeks and get to base camp on March 28. Throughout April he and his fellow climbers will start their rotations.

This is involves climbing up a few hundred metres and back down to base camp for, and going up higher and higher each time.

It’s all in the name of acclimating the body to being able to function at heights that the body was not meant to function.

Then, in the second or third week in May, the group will start the actual climb of Everest which is 8,848 metres high. In contrast, Ireland’s highest mountain, Carrantoohil is 1,038 metres high. Anything over 2,000 metres and the air gets thinner.

Despite being the tallest mountain in the world, Mount Everest is not as difficult to climb as some others - although, as he noted, when you’re at 7,000, “everything is technical”.

K2, in Pakistan, is the second highest mountain in the world and it’s considered to be more difficult.

For him, the one he enjoyed most was McKinely, which was the first time a real expedition for the Irish Seven Summit’s group.

“You’re away for four weeks, hauling a sled in snow shoes and skies for up to 14 hours a day.

“There is a certain madness to this alright. But it’s so rewarding when you get to the top that it’s worth it.

“Standing on the summit, it creates a space in your imagination.”

“But I can tell you that when I did my first climb it never even crossed my mind that I’d do all seven.

So, the Leinster Leader asked, what will he fill his days with when he finally completes all seven?

“That’s a good question. I’ll definitely spend more time with my girlfriend,” the IT engineer explained.

He also has plans for sailing non-stop around the world. Surprisingly, considering his achievements, he describes sailing as his “first sport”. Mountaineering is “more of a hobby”.

Niall says there is a “certain aloneness about mountaineering”. While some of the poeple you meet at basecamp are great and very interesting, it is a kind of individual sport.

“But with sailing, unless you’re doing it solo, you’re with a team of anything up to 16. That’s what appeals to me about it. It’s more of a team sport.”

Leinster Leader readers can follow Niall and the Irish Seven Summits gang during April and May. He has kindly offered to write a regular blogs over those few weeks.