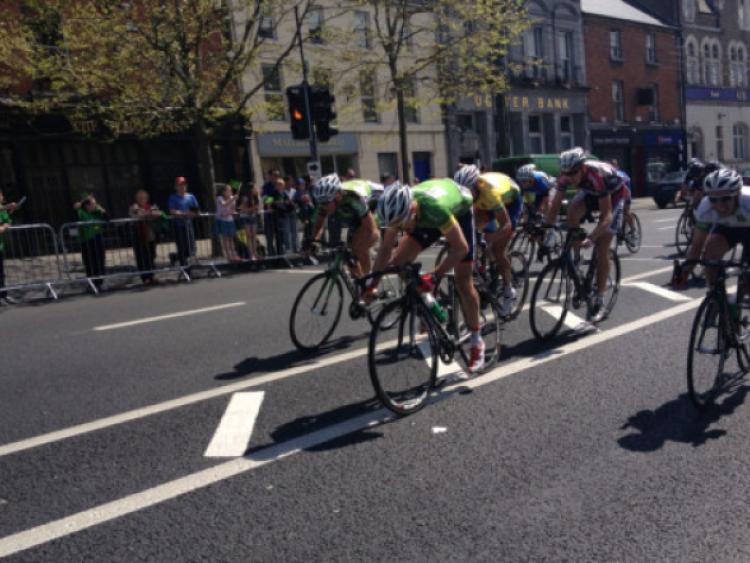 The penultimate stage of the An Post RAS cycle race arrived, rather quickly, into Naas on Saturday afternoon.

The penultimate stage of the An Post RAS cycle race arrived, rather quickly, into Naas on Saturday afternoon.

And it left Naas, only a little slower, just after noon on Sunday.

As the morning wore on, race organisers started to set up the finish line, the presentation stage and to mark out the final few hundred meters of the run-in to the stage. Soon after 2pm the road was closed as the announcers kept the growing crowd up to date with how far the cyclists were from the town.

The fine weather attracted a sizable crowd to the final with crowds lining the streets for the final 100 metres.

First in, however, were the Race the Ras group, who are cycling the route to raise funds for cancer research.

The AnPostRas account on Twitter announced that the group were leaving Hollywood at about 2.15. It took less than half an hour before Tomas Okrouhlicky, Roger Aiken and Jakub Kratochvila , in that order, hurtled down the hill from the Fairgreen, into the town and up to the finish line at the Post Office.

It’s likely they reached speeds in the neighbourhood of 70kmh in the last couple of hundred metres.

Marcin Biabalocki, the yellow jersey wearer was part of a large group that arrived in a few minutes later.