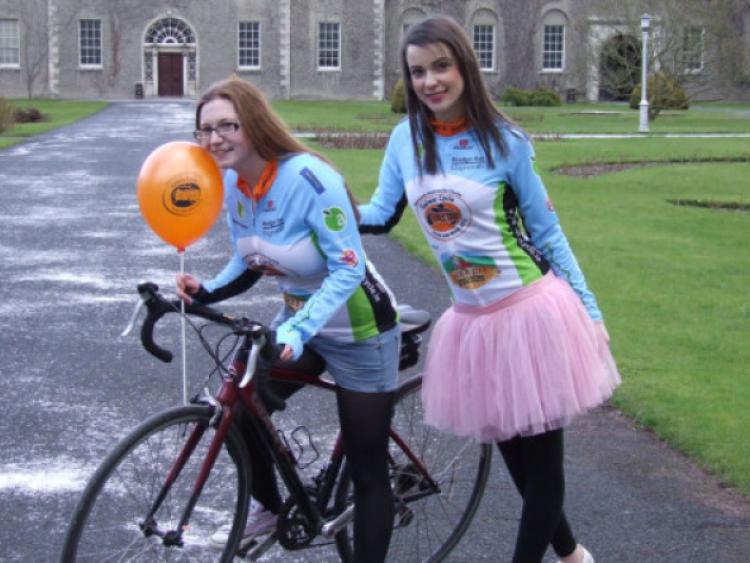 The iconic cycle, which has raised over E880,000 for good causes, will be run this year in aid of the Johnstown-based Jack and Jill Children’s Foundation.

Leaving at 6.30 on Friday morning, the cyclists expect to arrive in Galway’s Eyre Square soon after 5pm.

They will rattle buckets all day long in Galway on Saturday. And on Sunday morning, they will rise early from their beds once again and cycle home.

In total they will have cycled 400km over the weekend by the time they get back to Maynooth.

“We’re inviting everyone who passes us on the way to Galway to give us a wave, or a beep,” the President of Maynooth Students for Charity, which runs the event, Emma Kilgannon told the Leinster Leader.

“And at about 6pm on Sunday evening, we’d love to have a bit of a crowd to great us as we arrive back into the square in Maynooth.”

The cycle has grown hugely since its humble beginnings in 1987 when 15 cyclists made the trip. This years event involves a support crew of more than 30, with marshalls, motorbike outriders, Gardai, mechanics and physiotherapists.

The event has also attracted significant supporting sponsorship from Brady’s pub in Maynooth, Applegreen, Hutton and Meade, as well as Monroe’s bar in Galway.

“We couldn’t do it without the support of our sponsors,” Ms. Kilgannon, an equestrian student at the college explained. “We’ve never had so many cyclists before. The numbers have once again taken us surprise.

“But lets hope for the sake of the good people of the Jack and Jill Foundation that we can translate that into major funds raised!”

As is traditional at this stage, the cyclists will make their way to Roches pub near Donadea on Monday night to celebrate the completion of the event.