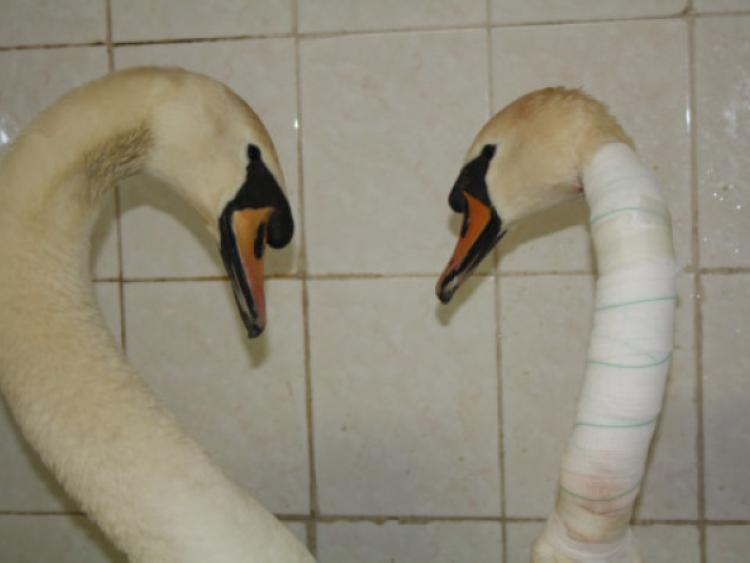 When you are involved in rescue you just never know what your day will bring and last Sunday week was to be no different.

When you are involved in rescue you just never know what your day will bring and last Sunday week was to be no different.

The phone started ringing early that morning with a few calls regarding swans. One of the calls was from a lady who had been out walking with her son in a park in Portlaoise.

She noticed that one of a pair of swans had a lot of feather loss and when she got close she seen that its whole neck was red raw, the skin was just hanging off. After making several calls to different people, she was given our number.

After discussing the situation with the lady, I became very concerned for the swan`s welfare. I then placed a status on our Facebook page looking for a volunteer to check out the swan as I was unable to attend the scene due to family commitments. Thankfully we got many offers of help.

Denise from Cara Rescue was close by and went in to check the swan. She called me to say the swan was in urgent need of help. Maura English and Helena Malone arrived on the scene to assess the swan. They waited and watched her while Eileen from the LSPCA arrived. Trevor Keenan happened to be out walking in the park with his family and offered his help and went home to get waders. Our volunteer Brid arrived a short time later with the equipment needed to catch the swan. A huge rescue operation then began.

The swans soon guessed what the group were up to so the rescuers had no choice but to try and follow them onto the water. After the LSPCA made a call to the Civil Defense for help, Liam Preston arrived to see if his team could be of assistance.

As it turned out the lake was not deep but is extremely silty so no boat the civil defense had would work.

Trevor Keenan called his mate Ducky Delaney who had a flat bottomed aluminum boat and that saved the day with the injured swan being caught quickly. It was decided her mate should come with her so they would not stress without each other.

Swans generally mate for life so any time apart would cause a lot of distress and the female had gone through enough without the added worry. The swan was rushed to Hawkfield Vet clinic where vet Audrey Brennan awaited her arrived.

For the next two hours she operated on the badly injured swan. It was a very anxious night as we waited till the clinic opened the next day. We were delighted to hear that she had survived the night and was strong enough to come back to the shelter for rehabilitation.

She was extremely excited to see her partner and they called to each other with delight. Five days after her operation she went back for a checkup and bandage change. The wound is healing up very well and no sign of an infection. Thankfully this very lucky swan is on her way to a full recovery. We would like to thank everyone who volunteered their time to help these beautiful swans and we must also thank and congratulate Audrey for her excellent work.