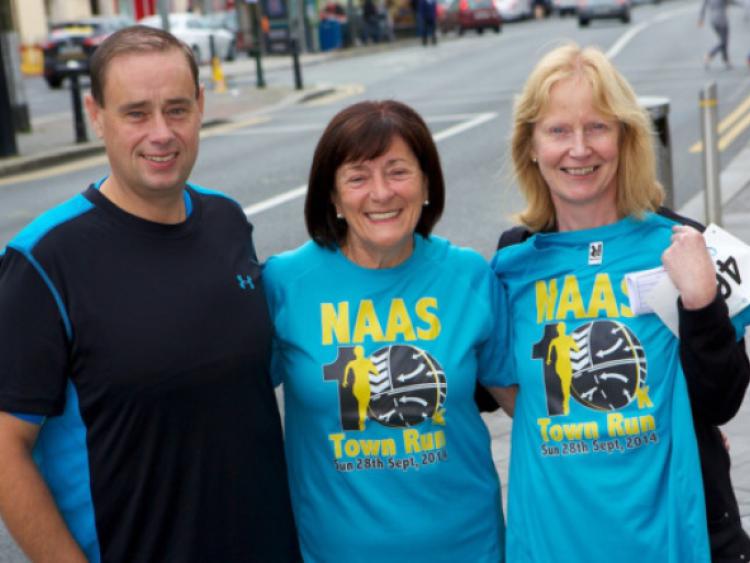 The next Naas Town 10K has already been pencilled in for September 27, 2015 – the last Sunday of the month.

The next Naas Town 10K has already been pencilled in for September 27, 2015 – the last Sunday of the month.

The inaugural event has been hailed as a great success by the main organiser Brendan Loughlin.

Next year’s run is set to be an even bigger event because the teething problems associated with the last month’s inaugural run will be tackled in time.

“We got a lot right in terms of organisation but one or two little things wrong. For example we will need more stewards on duty on the day but we’re aware of that and will be sorted out by next year,” said Brendan.

The route – starting and finishing at the Town Hall via Kilcullen Road, Ballyclare Road, Dublin Road, Monread Road and Sallins Road – will be retained.

The Jack & Jill foundation was the nominated charity and is likely to benefit by in the region of €5,000. All of the money raised came from  entrance fees but there were significant expenses to such as services provided by the chip and time company, t-shirts, medals and insurance.

A total of 475 people registered to take part and in the end 404 runners completed the event, including 75 year old Seamus Harte of Naas Athletic Club.

“We’re hoping it could become a community event because there were over 1,000 people on the street for the run apart from the runners themselves,” added Brendan.

“At the start we thought we might get some 600 runners but we did well to attract as many as we did given that more established events struggle to get those numbers.” He added: “Thanks to all who helped out in any way, to those who participated and to those businesses who provided any sponsorship.”