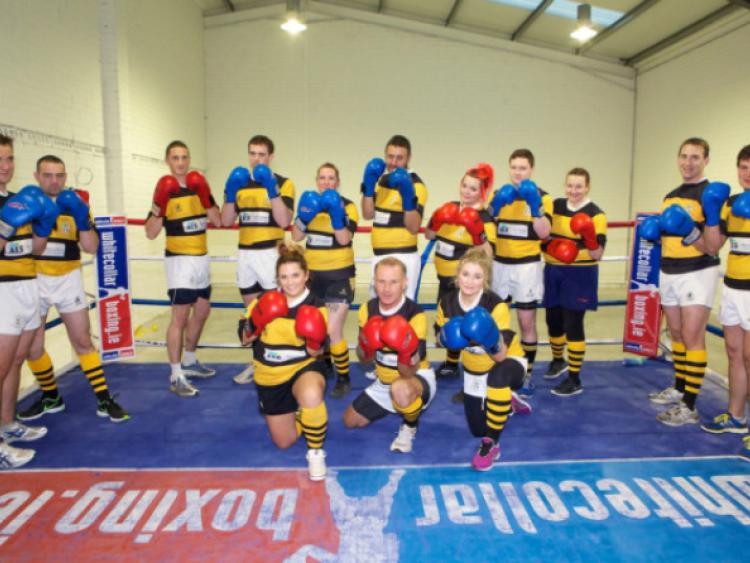 Newbridge Rugby Club will take on members of the army this Saturday night in a charity fight night.

Newbridge Rugby Club will take on members of the army this Saturday night in a charity fight night.

The rugby players and members of the military are donning boxing gloves and getting in the ring to raise money for both the club and the Curragh Lourdes Fund.

The fighters started their training five weeks ago have been put through a comprehensive programme of conditioning training, boxing technique and sparring.

They will step into the ring at Time Venue in Naas on Saturday evening, September 14, next for the rumble which has been named ‘The Newbridge Knockout’.

The 14 Newbridge RFC fighters have been training with Kevin Cumiskey of White Collar Boxing at the organisation’s new training facility at Ladytown Business Park in Naas. The army boxers have trained separately, which should make the match-ups on the night all the more explosive and exciting.

The event has drawn fighters from all sectors of the club, including current players, retired members and the women’s squad - five Newbridge RFC ladies players will swap their football boots for boxing gloves for the night.

“This will be one of the club’s biggest fundraisers of the year, and we would encourage all members and the local community to come out and support. The Curragh Lourdes Fund will also benefit thanks to the participation of the military,” said Newbridge RFC PRO Laura Coates.

Doors open at 7.30pm, and tickets at €20 include entrance into the newly revamped Time nightclub. Tickets are available from any of the fighters, Newbridge RFC committee members or on the door on the night.