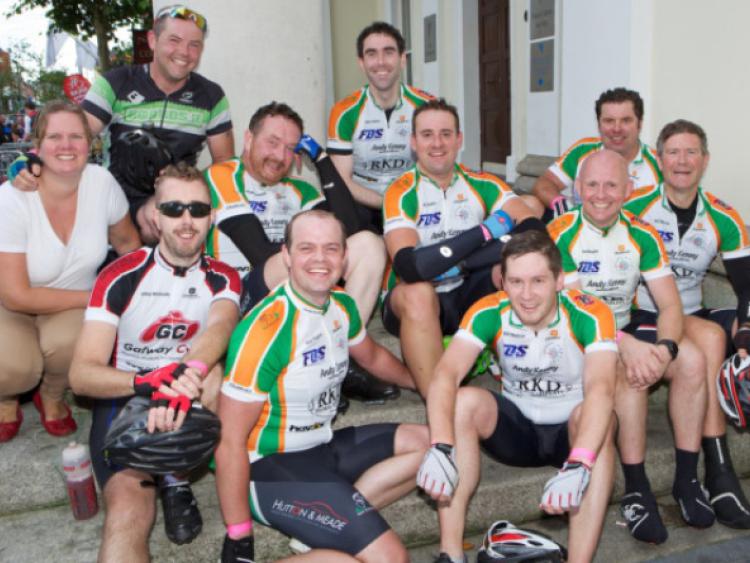 At some point in the depths of January or February this year, a gang of us were sitting around a table in Chill restaurant in Maynooth after a cycle.

At some point in the depths of January or February this year, a gang of us were sitting around a table in Chill restaurant in Maynooth after a cycle.

Somebody mentioned a thing called the Race Around Ireland. You can enter as a solo rider, as a pair, as a team of four or a team of eight. You start in Trim, Co. Meath on August 31 and you have a maximum 96 hours - all day and all night - to complete the trip of 2,200kms.

We thought it sounded like a bit of craic. Little did we know that it would come to consume our lives.

We had a meeting in one of the lad’s houses. Minutes of that meeting suggest we hadn’t a notion of what was ahead of us. There was talk of needing a car or two to accompany us, and a couple of support crew.

Next Sunday, we will line up at the start line in Trim. We will have a total crew, including cyclists, of 22 - all of whom are taking a week off work to be with us - and a total of seven vehicles.

Military precision has been brought to the operation. There are no less than two advance parties (known collectively as ‘the Mammies’) for all accomodation. There are meal plans assigned to each stop. Dietary requirements have been sought and approved.

A physiotherapist, Laura Ward from Celbridge’s Performance Clinic, will join us at various points in the journey.

The training has been the most interesting and revealing part of this great adventure of ours.

Every week has seen improvements, small and regular gains which, when taken together, add up to a significant total.

My Strava account (see strava.com) says I climbed 38,819 metres (and felt every inch), that I did 5,300 on my racing bike and the rest on my mountain bike - a nice way of varying the scenery and improving bike handling.

Andy Kenny from Andy Kenny Fitness in Grand Canal Dock was our Sgt. Major. As well as his weekly 90-minute spinning sessions - cruel and unusual torture where you tend to run out of sweat after about an hour - Andy introduced us to a very effective diet.

At its heart are two main concepts - cut out sugar and “if it’s white, it’s sh*te”.

He promised us that we’d lose a kilogram a week, and that’s pretty much what happened - it has made a huge difference, especially to our ability on climbs.

Another mentor is Ray Dowling, a former national champion. He gave us great advice on cycling techniques which also made a huge difference. Ray is also our crew chief, puncture repair man, and in the event that anybody gets sick or injured between now and Sunday, our number one sub.

We’ve had a couple of long cycles along the way. A couple of us were asked to marshall the 200km Console Cycle Against Suicide from Celbridge to Galway. The following day, for the craic, we cycled home again. That was eh, painful.

We also did large organised events like the Ring of Kerry. And only a few weeks ago, by way of testing our general progress, we completed the Tour of Kildare as a team.

But in more recent weeks as the race gets closer, we’ve concentrated on shorter, faster bursts - in line with the experience of the race itself. Wtih eight men on the team, we’ve divided it up into two four-man teams.

Each four man team will take an eight-hour 230km shift while the other team is resting and eating. And within each shift, each of the four cyclists will cycle as hard as they can for 15kms or half an hour, rotating through the four cyclists until the 230kms is completed.

After an initial article by this reporter on the Race Around Ireland, Kilcullen man Kevin Fee, who was involved in a successful bid by a four-man team from Naas Tri-club last year, contacted us. His advice in the initial stages of training was invaluable, and he even came with us on a dry run.

For some reason, most of our so-called ‘dry’ runs, coincided with cloud bursts and drenchings -although there were compensations. Even if the rain is pouring down, the Caha pass between Kenmare and Bantry will never be less than glorious!

Two of our dry runs took place at night time. This was an important consideration.

While there’s no problem getting lights that promise the divil and all when it comes to illumination, it was hard to know what it would actually be like once we got out there on the road.

Would we be able to see well enough to go downhill fast? Or to avoid potholes?

The answer to all our questions was yes. With the supporting follow car behind us, it was no problem at all.

The night time runs also had their own uniqe character.

For instance, as cyclist Mark Nugent passed through a small village in Co. Clare at about 3.30am one night, Gardai were dealing with a public order incident that threatened to become a mini riot. The offenders stopped thumping each other and started clapping him.

We’re recommending him as a peace envoy for Gaza.

Our support crew has also grown. Despite what we initially assumed, it was particularly easy to attract them. Being members of the greater Galway Cycle family (run by Maynooth Students for Charity), offers of help came thick and fast.

For some reason, sleep deprivation and sharing a van with smelly, sweaty, possibly even grumpy cyclists didn’t put anyone off. They were particularly taken with the notion that it’ll be great craic.

There is a more serious side to it all. We’re hoping to raise awareness and funds for Prader Willi Syndrome Association of Ireland. It’s a great cause. For more information, or to donate to them, see pwsai.ie